Conventional (air-source) heat pumps work in heating mode by drawing heat from outside air. During the heating season, when air outside is colder than the air inside the home, heat pumps draw warmth by blowing outside air over refrigerant-filled coils. The refrigerant in the coils absorbs available heat as it converts from liquid state into vapor. The vapor is then circulated into another set of coils inside the house and compressed into a liquid, a process that makes it hotter. A fan blows air over these relatively hot indoor coils, thus warming the air and cooling the refrigerant. The warmed air is distributed through the home. The cooled refrigerant is circulated back outside, the pressure on the refrigerant is released, and the refrigerant is again vaporized, drawing warmth from the outside air. The cycle keeps repeating itself. Air conditioners, or heat pumps working in cooling mode, operate the same way except the process is reversed. 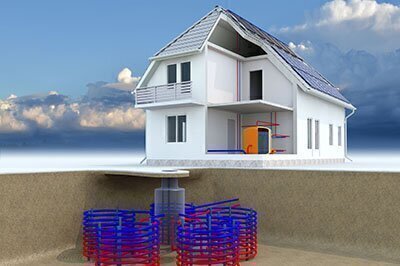 New heat pumps are remarkably efficient when outdoor temperatures remain above 33°F or so. In cold weather, conventional heat pumps can’t draw enough warmth from the outside air to keep things toasty. When this happens, a secondary less-energy-efficient source of heat must be used.

Since ground-source heat pumps don’t require alternative sources of heat during cold weather, and can more efficiently create warm air from their warmer surroundings, they can be incredibly energy efficient, costing far less to operate than conventional furnaces, air conditioners, and other heating and cooling equipment. According to the EPA, geothermal heat pumps can reduce energy consumption—and corresponding emissions—up to 40 percent compared to air-source heat pumps, and up to 70 percent compared to electric resistance heating with standard air-conditioning equipment.

But you’ll have to pay a lot up front to get these savings: A ground-source heat pump system can cost $35,000 or more. The equipment costs about twice as much as comparable air-source units, and installation is labor-intensive. The coils for air-source heat pumps take up relatively little space because fans blow air over the coils. But in order to draw warmth from below-ground temperatures, ground-source systems need to send refrigerant long distances, which means coils or pipes must be buried in a way that requires a lot of expensive digging or drilling.

Because installation costs are so high, even if you could buy and install a ground-source system for a bargain rate of, say, $20,000 it would still take a long time to recoup the up-front costs through energy savings. But there are other factors to consider.

First, Energy Star-certified ground-source systems qualify for a generous federal tax credit for the entire cost of the project, including installation (for 2020, the credit is 26 percent). In many areas, there are also generous rebates available from utility companies.

Ground-source systems are well-suited for newly constructed homes for several reasons: You avoid ruining landscaping by installing systems; digging and drilling is cheaper because that work can be coordinated with other required digging; and you can spread out paying the higher up-front price by taking out loans. Some forward-thinking communities have installed large systems underneath school athletic fields. Another promising approach to designing new energy-efficient homes would be to build underground piping that all the homes in the community could share. But most developers won’t take on the expense of building homes or entire communities that use ground-source systems. In the future, more may be compelled to do so.

We won’t try to calculate the cost effects of a ground-source system spread across a 30-year mortgage. But paying monthly across 30 years for the system immediately begins to generate a positive cash flow, improving affordability.