Identity Theft: Are You Protecting Your Kids?

A Massive and Growing Problem

About 1.4 million children in the U.S.—one in 50—were victims of ID theft fraud last year, costing nearly $1 billion, according to a report by Javelin Strategy & Research. Dealing with the aftermath takes parents and guardians “a tremendous amount of time to resolve,” the report noted.

“A child’s Social Security number is a clean, unused, government-approved credential that doesn’t have anyone else’s bad credit on it, so the thieves love it,” said cybersecurity expert Michelle Finneran Dennedy, CEO of PrivacyCode. “It’s a fresh asset that no one is looking at, and they can pretty much become whoever they want to be.”

“I take that stolen Social Security number, attach any name to it I want, an adult date of birth, an address, and phone number—and then I go apply for credit,” Johnson said. “That will create a credit report. It’s a very thin file, no credit history whatsoever, but at least that person—that synthetic person—is now in the credit bureau system.”

The fraudsters use that fictitious identity to get a few credit cards—and they pay the bills on time to pump up the credit score. Once they have a good score, they apply for cards with high credit limits, and go on buying sprees and ignore subsequent bills.

“It’s an easy crime to commit, and very lucrative,” Johnson said. Because the collection notices are sent to the criminals who created the fake accounts, “chances are the child victim isn’t going to find out about the crime for years.” In many cases, victims don’t discover what’s happened until they’re old enough to apply for credit, an apartment, insurance, or even a job, and are denied due to info in their credit reports.

Dennedy told Checkbook her daughter’s identity was stolen when she was eight years old. Based on the synthetic identity created by the criminals, the young girl both had a job and purchased a yacht. Because the crime was spotted early, and was so outrageous, it was easy to unwind. That’s not always the case.

“If you don’t discover the theft until you’re a young adult, it could be that you’ve taken out several credit cards and have failed to pay them; or you could have some misdemeanor charges, or some other problems in your record, so it’s a lot harder to prove that you’re clean,” Dennedy said.

On average, dealing with child ID theft takes four hours longer than trying to resolve adult identity theft, according to the Javelin study.

“Because child ID fraud is so difficult to detect, it’s not surprising that it takes much longer to resolve than traditional ID fraud affecting adults,” the report noted. “Adults often detect ID fraud by monitoring bank statements, tax returns, and credit reports. Children generally don’t have such avenues for detection.”

Sometimes parents or guardians, struggling to make ends meet, try to solve their immediate financial problems by creating accounts in their kids’ names. Down the road this can prevent the child from renting an apartment or getting a student loan or credit card because they now have terrible credit.

“Find another way,” said Eva Velasquez, president and CEO of the nonprofit Identity Theft Resource Center. “When you start building credit and taking loans out in your child’s name, even if it’s just to get a cellphone or turn on utilities, you are actually harming them in their future. They’re going to have a big mess to clean up. And it’s a crime.” 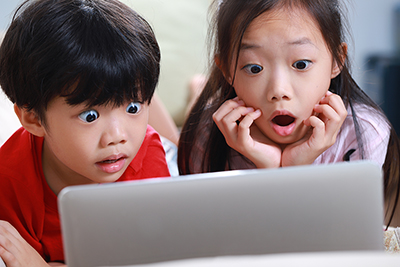 You can’t eliminate the threat, but there are steps you can take to make things more difficult for identity thieves.

Start by contacting the three big credit reporting agencies—Equifax, Experian, and TransUnion—and placing a security freeze on your child’s accounts.

“Freezing your child’s credit is one of the most robust protections you can take as a parent,” Velasquez told Checkbook. “It freezes everyone out of that credit file. It stops someone who has access to your ocial Security number, and other credentials, from opening new lines of credit.”

Theoretically, children should not have credit files, but the credit bureaus have a process to open one, and then freeze it. Once those files are frozen, they can only be unfrozen (“thawed”) by a person who has the password or PIN created when the freeze was put in place.

This means scam artists won’t be able to open new lines of credit, rent an apartment, sign up for cable or cellphone service, or anything else that requires a credit check using your child’s frozen files. As a result, that request for credit will be declined.

(Note: You need to make sure someone you trust knows about the credit freezes and can provide those passwords/PINs to your children when they turn 18, should something happen to you.)

Freezing a minor’s credit files takes more work than freezing your own files—something you also need to do before you find yourself the victim of an identity thief. You’ll need to send the bureaus copies of documents that verify your legal right as a child’s parent or guardian to make decisions. These web pages explain what each bureau requires:

Velasquez cautions parents that their child’s identity credentials—and their own—have most likely been stolen in a data breach, so the goal now is to lock them down where you can.

“If you’ve provided [your child’s credentials] to anyone—a school, a medical provider, the list goes on and on—there’s a very high likelihood that that data has been compromised and the thieves already have access to it,” she said.

Child identity theft is like a cancer that grows if undetected. But sometimes there are warning signs. Parents need to investigate any time their child receives a notification that should not be sent to a minor, such as a jury summons, parking ticket, driver’s license renewal, credit card application, credit card bill, or collection notice.

“One of the biggest red flags would be a collection notice or call from collection agencies,” said Velasquez. “As a parent, you may be inclined to say, ‘Well, this is just a mistake. You’re asking for the wrong Jane Smith.’ If that happens to you, follow up and find out which Jane Smith they’re trying to get in touch with, particularly what credentials are being used. It could be a case of an identity crime and actual misuse of your child’s Social Security number or other credentials.”

If you suspect your child has been the victim of identity theft, contact the Identity Theft Resource Center. You can talk one-on-one to a trained counselor at 888-400-5530.