German-based discounters ALDI and Lidl, ubiquitous in most of western Europe, continue to expand their U.S. footprints. Like Trader Joe’s, which is also a German-owned operation, these alt-grocers carry mostly their own brands, rather than national-brand products.
ALDI and Lidl focus on low costs, and our survey found their prices to be astonishingly inexpensive—cheaper even than Walmart and comparable to warehouse clubs. Trader Joe’s also offers lower prices than many traditional supermarket chains, while earning mostly high accolades from its customers.

Since the market basket we used for our price survey largely consists of national-brand products, and since these three companies offer mainly their own brands, we couldn’t compare their prices using our standard price survey. Instead, we had to shop each using a special survey that included the same fresh produce, meats, and dairy items in our standard survey, comparing the national-brand items on our list with the prices of these unique stores’ own brands. (When comparing prices, we used per-unit pricing—for example, price per ounce.)

The figure above shows the results of these comparisons: 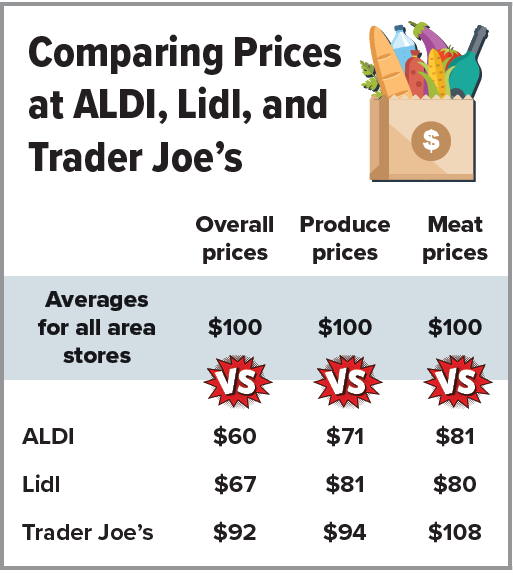