While there is debate on whether organic food is safer, more nutritious, or tastes better than conventionally grown products, if your primary reason for buying organic is that you want to do your part to lessen the impact farming has on the environment, you’re doing the right thing. Much research has found the practices used by organic farming cause less harm to the environment than non-organic practices (although things aren’t as clear on organic meat production).

But buying organic means paying a lot more for food. The market basket we used to shop local grocery chains and stores included 25 fresh produce and 33 meat and dairy products. When we survey stores for their prices for produce, meat, and many of our dairy items at grocery stores, we seek the lowest-priced items available, which often are non-organic products. But when we looked for organic-only options, we found striking price differences: Overall, organic products cost 63 percent more than their non-organic counterparts.

As you can see, the organic-price penalty is bigger at some stores than at others. For produce, ShopRite and MOM’s Organic Market offered low prices for organic options. For organic meat and dairy products, however, we found low prices at TheFreshGrocer, MOM’s, Wegmans, and Weis.

Keep in mind that some companies clearly have higher buying standards than others, as indicated by the huge chain-to-chain differences we found when we surveyed area grocery shoppers. When comparing prices vs. quality, MOM’s stands out for organic produce. Because MOM’s Organic Market is a recent addition to the Delaware Valley area (it now has stores in Bryn Mawr, Center City, and Cherry Hill), we haven’t yet received enough ratings in our consumer surveys to report on its quality, but in the Washington, D.C. area, where it is headquartered, it ranks among the highest-rated chains for produce and overall. And MOM’s prices for organic produce (it sells organic products only) were among the lowest.

On the other hand, Whole Foods, which also gets high produce quality ratings from its customers, offered slightly higher-than-average prices for organic produce, meat, and dairy. 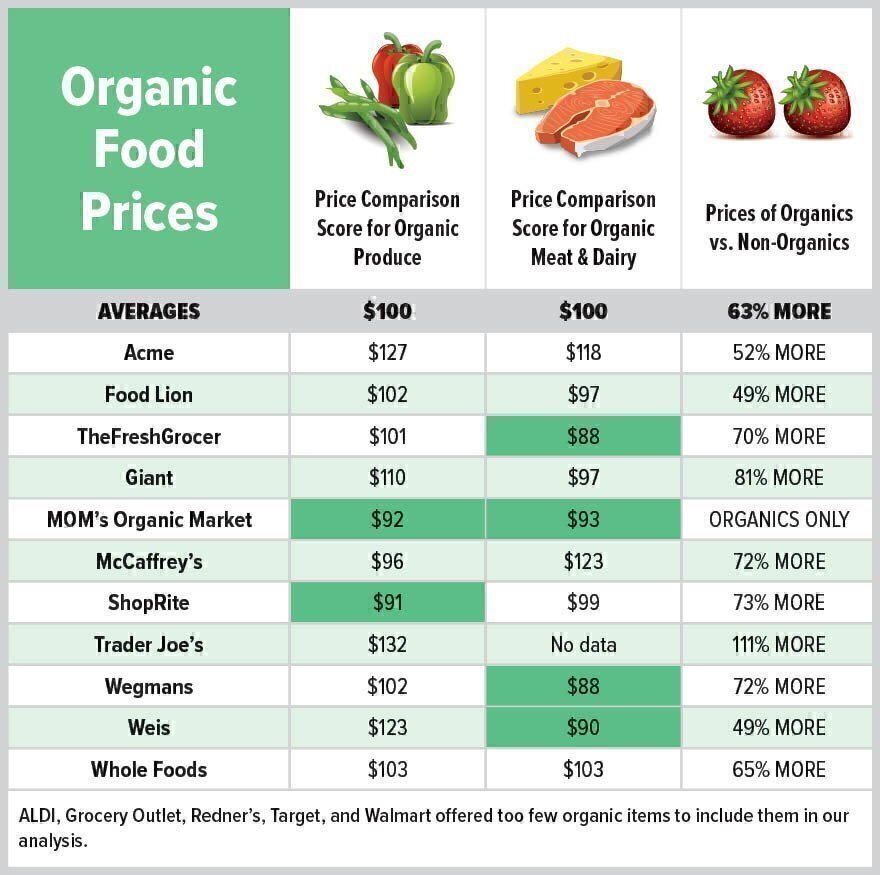 Know that while buying and eating organic likely does lessen the impact of agriculture on the environment, the most environmentally friendly approach is probably to eat less meat (or none); minimize purchases of highly processed and packaged food; as much possible eat what’s in season; and whenever possible buy products grown or raised locally that didn’t have to be shipped a long distance.