Before you get started, review any concerns you have with your inspector. Show him or her any info you obtained from the seller as well as any problems you suspect from your own lookarounds.

You’ll learn a lot about your potential abode during the inspection. In addition to looking for and pointing out problems, most inspectors use the session to educate their clients on basic maintenance tasks. 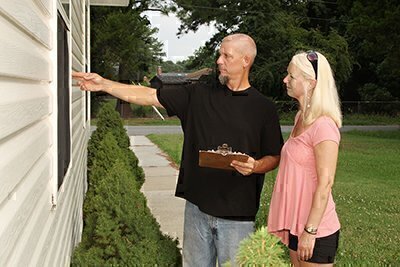 Since all the home inspectors we tested missed some obvious problems, feel free to try some things yourself—switches, operation of window treatments, doors and windows—and speak up if you see something that doesn’t look right. Act as an extra set of eyes, but don’t disrupt your inspector’s workflow.

Make sure all problems found are clearly recorded in your report with pictures and descriptions. If you later discover something was omitted from your report, ask for an amendment, especially if you want the sellers’ help to pay for the fix.

Very important: Most general home inspectors don’t check for many problems, including some that might generate huge repair or abatement costs—such as looking for asbestos, urea formaldehyde foam insulation, radon gas, mold, termites, and defective drywall or stucco—and they don’t inspect swimming pools or hot tubs, underground fuel storage tanks, septic systems, and chimneys or fireplaces. (If there’s a septic system, most jurisdictions require a separate inspection of it before the sale is complete.) If you or your inspector suspect a problem with any of these biggies—or a major issue with roofing, plumbing, electrical, or drainage—bring in a specialist for a second opinion. Or if there’s evidence of major structural problems or earthquake damage, it’s time for an evaluation from a structural engineer.

Keep in mind that in addition to missing (sometimes obvious) problems, even great home inspectors might accidentally identify non-existent defects. For example, after his moisture meter detected water behind a living room ceiling, my inspector suspected the shower pan for the recently remodeled master bath was installed incorrectly, requiring a very expensive fix. After much back-and-forth with the sellers, they brought in a plumber, who found the moisture actually came from a gap between a row of tiles. A bit of caulk resolved the issue.