Appliance repair services often find that their customers could solve many problems on their own by reading their owners’ manuals and using a little common sense. All too often the appliance is simply unplugged, a circuit breaker has tripped, the water is cut off, or a reset button needs pushing. 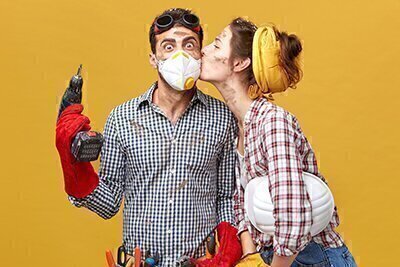 Beyond simple solutions, many major appliance repairs require pretty easy fixes most homeowners can tackle themselves. There is an abundance of online videos and repair-related message boards to help you diagnose and fix most problems. You can buy parts from local distributors or from websites like RepairClinic.com, which offer a lot of other useful how-to information, as well. Some of these websites have technicians available to answer questions.

You rarely need to buy tools for these quick fixes; most can be performed with a screwdriver, adjustable wrench, and a few other common household tools, plus a multimeter, which you can use to run a continuity test to determine whether and where an electric circuit is broken. You can buy a multimeter for around $10.

We reviewed instructions and looked up prices for seven common repair jobs, such as replacing a drive belt on a dryer to replacing a control board and baking element on an oven. On average, we estimate we’d save $60 to $200 on each project vs. calling in a pro.

For example, we found we could replace the icemaker on an Admiral refrigerator for $110, the cost of buying and shipping the new part. Using videos and instructions available from online parts retailers, we expect the job to take about a half hour and require just two screw drivers and a simple ratchet wrench or nut driver. We estimate our half hour of work would save about $200.

At first, we thought replacing the electronic control unit on a Frigidaire oven might be too complicated, but it turned out to be one of the easiest fixes we examined, requiring maybe a half hour’s work and just a few basic tools. With a DIY cost of $133, we estimated a savings of around $150.

Some repairs are so simple they cry for DIY: To replace the turntable motor for a microwave, we’d pay $40 for the part and spend only a few minutes installing it, rather than paying an extra $100 or more for a service visit.

Of course, even if a repair seems easy, there’s always a chance that something may go wrong, which can turn a quick and easy fix into a long and frustrating one or force you to hire a professional anyway. And because some parts retailers don’t accept returns or charge hefty restocking fees for them, you can easily waste money if you misdiagnose the problem and buy the wrong parts. (The best return policy we found was from RepairClinic.com, which is for one year and even takes back opened packages.)

When considering whether to DIY or call for help, ask yourself:

If you’re ready to take on a repair, take the following precautions:

Here are the 10 major-appliance malfunctions for which repair shops we interviewed say often have relatively simple DIY fixes: