Cryptocurrency is hot. Even those who don’t understand how it works—that’s most of us—keep hearing about all the people getting rich from it.

Cryptocurrency investment schemes have skyrocketed during the pandemic, as criminals leverage this gold-rush mentality, promising huge returns in just days or weeks. The pitch, while appealing, is a pack of lies.


Joe Rotunda, director of enforcement at the Texas State Securities Board and vice chair of the enforcement section at the North American Securities Administrators Association (NASAA), said most schemes promise that “You’re going to make a lot of money...so much money that you’re not going to know what to do with it.” He said the scams also promise that. “Not only are you getting a high rate of return, but it’s risk-free, guaranteed, so you don’t have to worry about anything.”

NASAA named fraudulent cryptocurrency investment scams as one of the top investor threats for 2021. All too often, cryptocurrencies and related financial production are nothing more than “public facing fronts for Ponzi schemes and other frauds,” NASAA warns.

The Federal Trade Commission is being flooded with complaints about crypto scams at an alarming rate—nearly 7,000 scam reports between October 2020 and March 2021.

“Compared to a year ago, we're seeing 12 times the number of reports and nearly a thousand percent increase in reported losses on cryptocurrency investment scams,” said Emma Fletcher, an analyst with the FTC’s division of consumer response. “In just the last six months, people have reported losing more than $80 million on these scams.”

The median loss was $1,900, Fletcher said. By comparison, the median loss for all fraud reported to the FTC is about $400. Most of the victims are 20 to 49 years old. Someone in this age group is five times more likely than someone 50 and older to report losing money to a crypto-scammer.

“It's especially striking that people in their 20s and 30s have reported losing more money on investment scams than any other type of fraud in the six months between October and March, and about half of those losses are in cryptocurrency. So, the data suggest this is a huge issue with that age group right now,” Fletcher told Checkbook.

Victims who are 50 and older do tend to lose more money when they fall for a cryptocurrency scam, with a median loss of $3,250.

How the Fraudsters Set the Trap

The fraudsters are using social media ads and message boards, they’re creating bogus websites, and even running radio advertisements. In many cases, they create bogus testimonials to make their crypto-cons look legitimate (see examples below). A common ploy for the crooks is to become a “friend” on social media with someone they want to target. 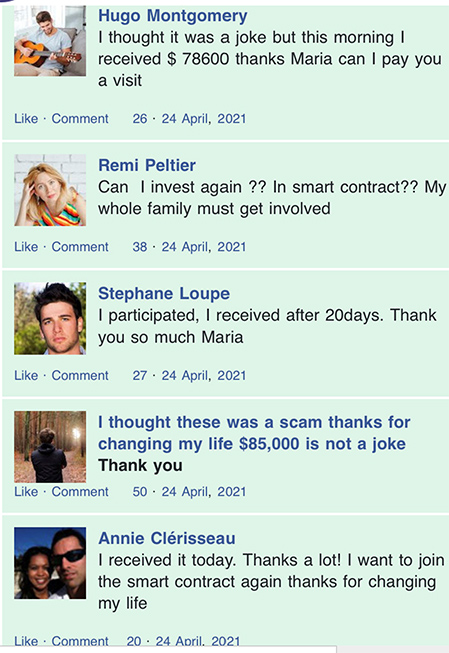 “It starts out with pleasantries, and then it switches to, ‘Ya know, I’ve been dabbling in cryptocurrency and I’m really good at it. I can get you hooked up with one of these opportunities,’” explained Amy Nofziger, director of victim support at the AARP Fraud Watch Network. “The next thing you know, you’ve wired them money, or used a peer-to-peer app to send them hundreds or thousands of dollars to invest for you.”

That’s what happened to Marty, who lives in Jacksonville, N.C. He was befriended on social media by a woman who claimed to be a bitcoin trader. Marty told Checkbook he didn’t know much about virtual currencies, but he wanted to start investing. Maria seemed “pretty knowledgeable,” and she was “very persuasive,” he said.

“It was very enticing. She said the profits were guaranteed and everything is insured,” Marty told Checkbook. “I was skeptical, but it all happened so quickly, before I could start asking questions. There were a lot of warning signs that I know now, but I was ready to make an easy profit.”

Marty realized he’d been conned, and he wanted his $2,500 back. But the company said it wouldn’t do that, until he paid it another $750; something he wasn’t going to do. Marty reported the company to the AARP Fraud Watch Network, and got guidance on what else he could do.

“It’s definitely a red flag anytime you get an investment offer via social media from someone you’ve never met,” AARP’s Nofziger cautioned. “For some reason, we seem to trust more when we’re on social media. But we need to remember that people on social media can pretend to be anyone they want to be, including cryptocurrency traders or billionaire investors.”

Some scammers are impersonating legitimate investment professionals who are licensed to sell securities. They’re using real brokers’ registration numbers to add legitimacy to their schemes.

To grab attention, crypto con artists are stealing celebrity names to create bogus endorsements or fake giveaways—promising to multiply any cryptocurrency you send them.

The FTC says investors lost more than $2 million to Elon Musk impersonators in just the last six months. They believed he was going to “multiply” the currency they gave him.

The Right Way to Invest in Cryptocurrency

Cryptocurrency is sexy and exciting, and you’re convinced you want to get in on the action. Just remember:

Investing in cryptocurrency and related financial products should be seen for what it is, NASAA cautions: “Extremely risky speculation with a high risk of loss.”

If you’ve decided to take part in the crypto craze—fully aware that you could lose your entire investment—at least buy from a legitimate company that handles digital currency. Check with the state’s securities regulator (every state has one) before you part with your money. Just send an email and ask if there’s any public information or regulatory information that can be shared about the company. You can also find out if the company is registered to sell these investments in your state—if not, steer clear—or if it’s had any regulatory or criminal problems.

“It's not necessarily a bad industry; it's just an industry that has attracted bad actors,” said NASAA’s Rotunda. “That email [to one of us] can save you a lifetime’s worth of savings.”

You can buy cryptocurrency through PayPal and store it in your Venmo account. Robinhood, popular with millennials and small investors, is registered as a securities dealer in every state. Coinbase, now listed on the NASDAQ, is another option. Or check with your trusted investment advisor.

Know the Warning Signs of a Scam

Chances are you’re dealing with a con artist if:

“Remember, people making money on cryptocurrency bought low and sold high; that’s the way it works,” the FTC’s Fletcher reminds us. “If someone is promising you a better way—to do amazing things and bring back huge returns for you—that’s a big red flag.”