Scammers “are quickly discovering how to use people’s lack of knowledge about the system” to rip off investors, a Better Business Bureau study concluded. Cryptocurrency “opens new opportunities for the repackaging of common investment scams,” the BBB report noted. Bitcoin ATMs and apps make it easy to get victims to convert real money into cryptocurrency, and send it digitally to bogus investment companies. 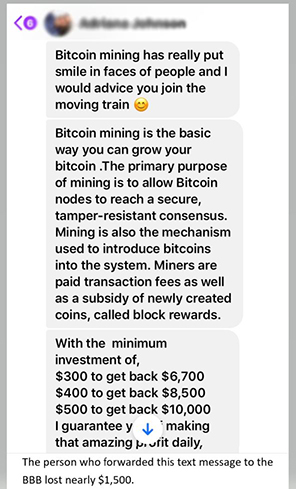 An investor alert from the Securities and Exchange Commission warns that crypto investment scams have already resulted in “devastating losses.”

Investors may be less skeptical of investment opportunities that involve something new or “cutting-edge,” the SEC cautioned. With celebrity endorsements and news reports of skyrocketing values, the fear of missing out on their chance to become wealthy may also be at play.

While Bitcoin (developed in 2009) and Ethereum (2015) are two of the best-known digital currencies, there are now nearly 10,000 cryptocurrencies worldwide, according to Statista.com.

Shannel, who asked Checkbook not to include her last name, works in the finance department of a university in St. Louis. She saw a YouTube video about an investment company that helped people make huge profits quickly with Bitcoin investments.

“I’m hip to scams,” Shannel said, but the video was so good—filled with glowing testimonials—that she contacted the company via WhatsApp.

Shannel was told to buy $1,500 worth of Bitcoin through CashApp. It was a stretch for her to come up with the money, but she did it hoping to make enough to buy her daughter a car. After 10 days, Shannel received a screen shot that showed her account had increased to more than $7,300.

But when she tried to withdraw her earnings, Shannel was told she had to pay a $734 commission, (which she did), and then a broker’s fee of $1,167.80. At that point, she realized she’d been scammed.

“I think it’s horrible to take advantage of people who work hard for their money,” Shannel told Checkbook. “Please do your homework. Do not just take other people’s word that this is a legitimate investment. Do a background check before you give your hard-earned money to anyone.”

Shannel is now working a second job to recoup her losses and save enough for her daughter’s car.

A Serious and Growing Problem

It’s hard to quantify the losses, but based on data from the BBB and the Federal Trade Commission, the problem is intensifying. Investment fraud is a major portion of cryptocurrency complaints to the BBB Scam Tracker, doubling between 2019 and 2021, with losses in the millions.

“The sites require usernames and passwords,” he said. “They’ve got live customer service through a chat function. You can check your account and supposedly see how well you are doing with the investment. So, that makes people pretty feel safe; that they’re really dealing with somebody legit. They don’t realize their money’s probably been stolen from the moment they send it in.”

Another victim, Mr. Chen, who lives in Massachusetts and asked Checkbook not to include his first name, was encouraged to invest in crypto by a new Facebook friend, who claimed to be a successful trader on the Hong Kong exchange. The new “friend” showed him screenshots of how much money she was making.

After a few weeks of correspondence, Mr. Chen was asked to give it a try. He was assured it was “safe, 100 percent guaranteed, and easy,” he recalled. 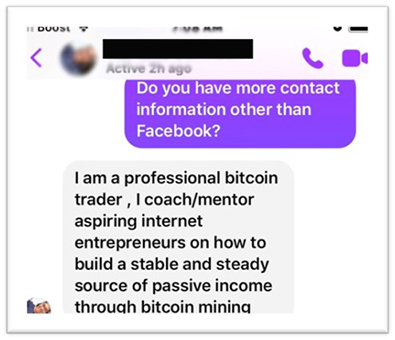 Based on his “friend’s” purported success, Mr. Chen opened an account for $25,000 without investigating the company. And to his delight, he soon “made a decent amount of money.” So, when he was pressured to invest another $25,000, he agreed.

Before long the account supposedly grew to $560,000. Mr. Chen was thrilled—until he attempted to withdraw his initial $50,000 investment. After getting the runaround for a few weeks, “customer service” said he would need to withdraw the entire amount, and pay a five percent “overseas handling fee” of $28,000. He was told he could not deduct that fee from his sizeable earnings; it had to be new money. That’s when he realized he was dealing with criminals.

“I don’t think they ever put my money in the real market,” Mr. Chen said. “It’s not right. They’re just trying to trick people to get their money.”

Mr. Chen filed complaints with authorities in Hong Kong, the FBI and the BBB, but he realizes the $50,000 is gone. He hopes others will learn from his story: Be skeptical of new Facebook friends who encourage any sort of investment, and never send any money until you’ve thoroughly vetted the investment company.

Based on complaints to the BBB Scam Tracker, social media is the most common place for victims to be lured into in cryptocurrency scams. The criminals often impersonate friends on Facebook who make wild claims about their success. They urge victims to get in on the action by contacting their “investment advisors,” who are fellow con artists.

If you’re considering a digital-asset-related investment, first learn how the investment works and who you’re dealing with. Look for warning signs that it may be a scam. The SEC urges caution if you spot any of these red flags:

Before you hand over your money, verify that the individuals and firms offering an investment in securities are licensed/registered by using the search tool on Investor.gov. Carefully review all materials about any investment opportunity, and ask questions. The SEC website has a variety of resources about investments involving digital assets.

Related: Social Media Scams Are Skyrocketing. Here’s How to Protect Yourself.

Related: Do I Owe Taxes on My Cryptocurrency Investments?