You see them everywhere—on restaurant menus, in newspaper and magazine ads, on billboards, product packages, business cards, and at the checkout counter. Quick Response (QR) codes have been around for decades, but they were rarely used for consumer transactions before the pandemic.

These strange-looking black-and-white squares—developed by a Japanese company in 1994 as an inventory-control technology—can hold significantly more information than the standard bar code. 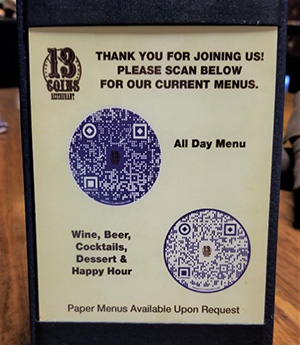 As the fear of COVID-19 made touchless interactions essential, QR codes became the “safe” way to place orders and make digital payments. Since the pandemic, half of all full-service restaurants now have digital menus accessed by QR codes, according to the National Restaurant Association. PayPal QR code payments are now accepted at CVS, Nike, Footlocker, and around 1 million small businesses, according to The New York Times.

Once scanned and clicked, a QR code takes you to a website (the URL is embedded in the image) to place an order, make a payment, download coupons or apps, or learn about new products and services.

The rapid acceptance of QR codes has been good for retailers, but it’s also provided cyber criminals with a powerful new tool.

“The more people start using QR codes, the more of an opportunity it creates for attackers,” said Lorrie Cranor, director of the CyLab Security and Privacy Institute at Carnegie Mellon. “Most of the time, the QR code takes you to whatever website you thought you were going to, but sometimes you wind up going to a phishing website or a website that’s full of viruses or malware.”

For the fraudsters, hiding a malicious link in a QR code is better than including it in an email or text message, where the intended victim might spot it. You can’t look at that little square and spot the danger.

“Since a QR code can send you to any webpage, [the criminals] can do almost anything they want,” said Hank Schless, security solutions manager at Lookout, a global security firm. “They could send you to a rogue website and ask you to verify your identity—and in doing so, grab your personal information, maybe a Social Security number or credit card number. They could also ask you to download malicious applications that have hidden functionality to swipe sensitive data from your device.”

To prove how easily a QR code can be used to trick people, Lookout put a code on the side of its booth at a cybersecurity conference in San Francisco earlier this year, telling people to scan the code to win a free iPhone. The code led to iphonewinnerrsa.com. While it seemed legit, it could have been a clever phishing attack. Thankfully, the site was created by Lookout to prove its point. Scan the code, if you want, to see where it takes you. We promise, nothing bad will happen.

Malicious QR codes are also dangerous because they can “initiate action on smartphones,” tech reporter Mike Elgan explained in a column for SecurityIntelligence.com. They can launch a payment app and transfer money, add contacts, follow a malicious account on social media, add a malicious Wi-Fi network, or divulge the victim’s location, he warned.

Con artists have added QR codes to a variety of familiar scams, the Better Business Bureau warned in a scam alert last month. Based on reports to the BBB Scam Tracker, these hoaxes include advance fee loan, employment, and utility scams. In many cases, the QR code links to the scammer’s bitcoin account, providing an instant and irreversible way for victims to send them money.

Checkbook read the Scam Tracker reports, and found that many involve bitcoin payments. A few examples:

QR codes are here to stay and are likely to be used in a growing number of ways. While most QR codes are safe, it’s wise to be skeptical and take steps to eliminate potential vulnerabilities.

Here’s how to play it safe:

Christopher Budd, global threat communications manager at Avast, says it’s important to know where the QR code is going to take you. One way to do that is to use a QR scanning app that shows you the URL before you click on it. Look at the URL and then click on the “lock” in the address bar to see what the certificate says.

“In the past few years, bad guys are using SSL [secure] connections for their malicious websites, so just looking for a lock is not sufficient anymore,” Budd told Checkbook. “You have to click on the lock to find out what server you are actually connecting to.”

Consider Antivirus Protection for Your Phone

Many people don’t think about security on their smartphones. And yet, these devices contain mountains of sensitive personal information. Security software can block malicious links and warn about possible phishing attacks.