Government grant scams have been around for years. Scammers still target people with newspaper and online ads, email, texts, and phone calls pretending to be with a government agency. But recently, they’re also using social media.


The cyberthieves hack a social media account (most often Facebook) and send messages to the account holder’s friends telling them they qualify for a government grant. Just click the link, the messages say, to get your money.

“Because the scammers have hacked that Facebook account, they can pretend to be that person,” said Amy Nofziger with the AARP Fraud Watch Network. “So, when the victim gets the Facebook Messenger message, it appears to come from their friend, when in fact it’s really from the criminal. And that’s why the victim clicks on the link, because they actually think it’s coming from someone they know and trust.”

A Victim’s Story: ‘I Thought I Was Talking to My Uncle’

Patricia, a 55-year-old retiree who lives on a fixed income near Boston, was ecstatic when she received the Facebook message from her uncle—a message she assumed was real because it came from his account. 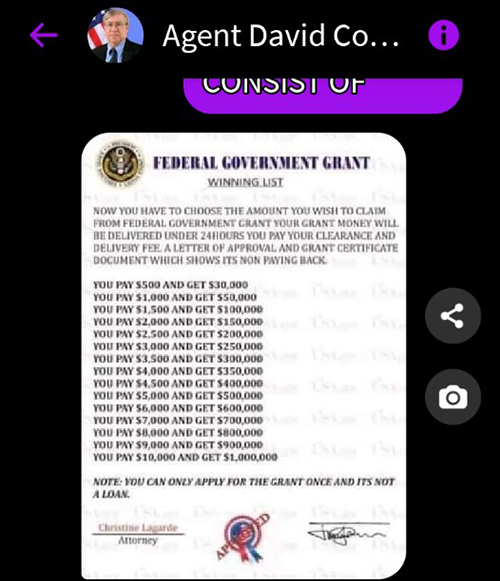 David, who posed as an “agent” and said he had been contacted by Patricia’s uncle, messaged her with the “winning list” of available federal government grants, and how much each one cost. These were grants, not loans, so they do not have to be repaid, he said.

“You are not paying to get any money,” David wrote. The fee is for “clearance and delivery.”

David didn’t want to give Patricia time to think about this. “You have to jump on this right away,” he told her.

When Patricia said she couldn’t do anything until her Social Security check arrived in a few days, David offered her a special deal: She could have a $130,000 grant for a reduced fee of only $500. 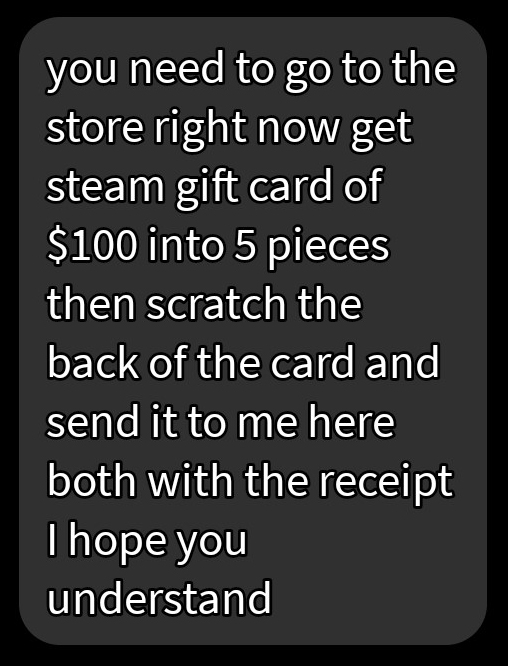 To do that, she was instructed to go to the store and buy five $100 Steam (an online gaming website) gift cards. Patricia had never heard of Steam cards, but she went to a few stores and bought some.

When she got home, she looked at the gift cards. The package said: “Download and play thousands of your favorite PC games.” That’s when she realized something was wrong and she contacted the police.

The officer who came to her house said there was nothing he could do. He said that a crime hadn’t been committed since she hadn’t given the scammer anything. (Even if she had given them the numbers from the backs of the cards, most local police departments don’t have the resources to deal with online crime.)

“I can’t use the cards, and I can’t get my money back, so I’m out $380,” Patricia told Checkbook. “I thought I was talking to my uncle, but it was completely false. I should have known better.”

Patricia wrote the scammers and told them they should be “ashamed of themselves.” It’s been a couple of weeks now, and they’re still sending her messages and images from her uncle’s Facebook account.

The Bottom Line: You can’t get any type of grant without applying for it. With government grants, there is never a fee to apply, and information about what’s available is free at Grants.gov. A federal employee would never contact you about such grants; only scammers do that.

“There is no secret system to getting these grants, and certainly none of these grants will be advertised through social media,” AARP’s Nofziger cautioned.

Red Flag: Fraudsters often ask to be paid with gift cards because they are anonymous, untraceable, and as soon as you give them the code on the back of the card, they can drain the money instantly. Being asked for payment via gift cards is a sure sign of a scam.

More Info: FTC: How Do You Spot a Scam? Listen to How Someone Tells You to Pay

The government grant scam, like so many others these days, starts with criminals who impersonate a friend on social media. You may be less suspicious and more likely to respond if a message appears to be from someone you know and trust.

“Scammers love using social media accounts to trick people into clicking links or giving too much information,” said Adam Levin, host of the What the Hack podcast. “When you receive a message via social media account, especially if it’s somebody who’s a friend or family member, you assume that it’s the real deal. This gives the scammers authenticity and familiarity. And that, unfortunately, could lead you down a path you don’t want to take.”

Criminals have several ways to hijack a social media account. Since most people have weak passwords on their accounts and haven’t enabled two-factor authentication, hackers can simply take over the account. In other cases, they’ll send a message and ask you to click on a link.

If you do that, it could load malware onto your device, which will give the cyber criminals access to your social media account and your friends list, so they can send bogus messages that appear to come from you.

“A lot of people don’t realize how easy it is to commandeer somebody’s social media page,” Nofziger told Checkbook. “So, of course, if I got a Facebook message from my aunt, my friend, my sister, whomever it is, I think it’s them. And why would they lie to me? Why would they steal from me?”

Social media accounts these days are used for more than staying in touch with friends and making new ones. They’re often used for shopping and to log in to other accounts.

Social media is “increasingly where scammers go to con us,” according to a report from the Federal Trade Commission. “In fact, the data suggest that social media was far more profitable to scammers in 2021 than any other method of reaching people.”

More than one in four people who reported losing money to fraud in 2021 told the FTC the scam started with a social media ad, post, or message.

It’s important to protect your social media accounts with strong and unique passwords, and set up two-factor authentication to reduce the risk of a hack attack.

From AARP: Government Imposter Scams on the Rise

From the FTC: Government Grant Scams

From Checkbook: Social Media Scams Are Skyrocketing. Here’s How to Protect Yourself.

If you get a call, text, email, or social media message and don’t know what to do, call the AARP Fraud Watch Network Helpline at 877-908-3360 before you provide an unknown caller with information or money. You do not need to be an AARP member to use this free service.