What Are the Four Cs of Diamonds?

What Are the Four Cs of Diamonds?

by Jennifer Barger and Amber Petry

Though diamonds boast glittery good looks and a rep as the ultimate symbol of love, if you’re buying in, prepare yourself for a decidedly unromantic reality. Diamonds are graded and priced according to (probably overly) complex guidelines, they are often overpriced, and many stores abuse their customers with shifty practices designed to make you overspend. It’s enough to make that cubic zirconia ring look overly attractive.

All diamond shoppers will hear about the four Cs—cut, carat, color, and clarity—that help determine a stone’s price. Pay attention to these guidelines, but don’t be a slave to them. You can spend a lot more money for a higher-grade stone when a lower-grade one will do. For example, the diamond-pricing Rapaport Report lists the price for a “perfect” internally flawless, colorless diamond as nearly four times the cost of a nearly colorless one with slight flaws invisible to a naked eye. For those of us who don’t hang out with loupe-equipped jewelers, the less pricey stone would work just as well—if you shop smartly.

A diamond’s shape merely describes its geometry, such as the traditional round, square, rectangular, and emerald, plus trendy or novelty shapes like Asscher-cut, cushion, and heart. Cut describes the interaction of several attributes, including angles, dimensions, and symmetry, all of which influence how well the diamond reflects light (aka “the sparkle factor”). A skilled gem cutter can maximize brilliance and improve brightness.

The Gemological Institute of America (GIA) grades only round brilliant diamonds for cut. Because cut has the biggest effect on a diamond’s appearance, when shopping for a round brilliant stick to diamonds with excellent cut. You’ll pay more, but this is where you get the most bang for your buck.

The GIA offers the most meaningful measures of cut, with five grades from excellent to poor. They’re assigned based on factors including brightness, fire, polish, and more. Some retailers try to pass off shape attributes as measures of cut; be very wary of outlets that don’t readily supply detailed information about how they judge it. Some retailers create their own grades for cut, such as “Super Ideal” or “Signature.” Typically, these grades are given to diamonds that would fall into the upper end of the GIA grading categories, but you can’t count on it.

Diamonds are weighed in carats, with one carat equaling 200 milligrams, or 100 “points.”

Call it the Elizabeth Taylor effect: Many women crave a jumbo diamond. Because of demand, and the fact that large gems are rarer than small ones, weight has a disproportionate impact on price—a three-carat stone might be priced six times higher than a similar 1.5-carat one, rather than simply double the price.

Popular weights also affect pricing. Because many shoppers tell stores they want diamonds with minimum weights that are often round numbers (say, one carat), a stone that weighs 1.05 carats will cost disproportionately more than one that weighs 0.98 carats. So consider shopping for diamonds that weigh a bit less than popular one-third-, one-half-, one, and two-carat sizes.

Because many diamonds are cut to maximize weight (and price) at the expense of cut, be wary of stones that are cut exactly at one-tenth of a carat mark. Also be wary of diamonds that weigh in at 1.01 and 2.01 marks.

If you want a bigger-looking diamond for your buck, consider shapes other than round. Shapes with elongated dimensions can create an illusion of a larger diamond, particularly marquises, pears, and ovals. They’re also less expensive, per carat, than the most-popular round shape.

A diamond’s color is rated from D to Z, with D representing absence of color, the most valuable grade. Diamonds graded E and F are also described as colorless, while G- through J-grade stones are considered nearly colorless. K through M have faint color, N through R have very light color, and S through Z have light color.

Diamonds can earn grades beyond Z; these stones are considered “fancy” colors. Yellow and brown are the most common fancy colors, and therefore the least expensive. Red, blue, and green hues (especially deeply saturated ones) are very rare and very expensive.

For diamonds ranked a few grades apart—say, a D stone and an F stone—it’s nearly impossible to discern color differences with the naked eye or even side-by-side with a jeweler’s loupe. But you will see big price spreads, especially when comparing high-quality stones. For one-carat, internally flawless stones, diamonds rated as D color typically cost two-thirds more than Fs; for stones with many imperfections, the price difference is about 15 percent.

If you’re buying a single diamond for an engagement ring, it doesn’t make much sense to purchase one with a grade higher than F. In the store, under perfect lighting, you might (but might not) see that a D or E stone is brighter than an F. But in the outside world, no one will suss out the difference, so it’s not worth paying up to two-thirds more. For earrings and other types of jewelry, color grade is even less important.

When evaluating color grades, also consider the setting. With a yellow gold or rose gold setting, opting for a less expensive color grade makes even more sense because these metals’ hues mask slightly yellow diamonds better than platinum or white gold do.

In general, clarity flaws aren’t visible to the naked eye until the level of I1. But, as with color, even though you can’t tell the difference between a lower- and higher-graded diamond, price differences are huge. For a one-carat diamond, the difference between an SI1 and VS1 G-colored gem is usually about 25 percent, or around $1,800. Pay the higher price and you’ve shelled out for a difference you can’t see. One jeweler we spoke with said he would never personally purchase a diamond with a clarity level higher than slightly included (SI1 or SI2)—he calls it a big waste of money. 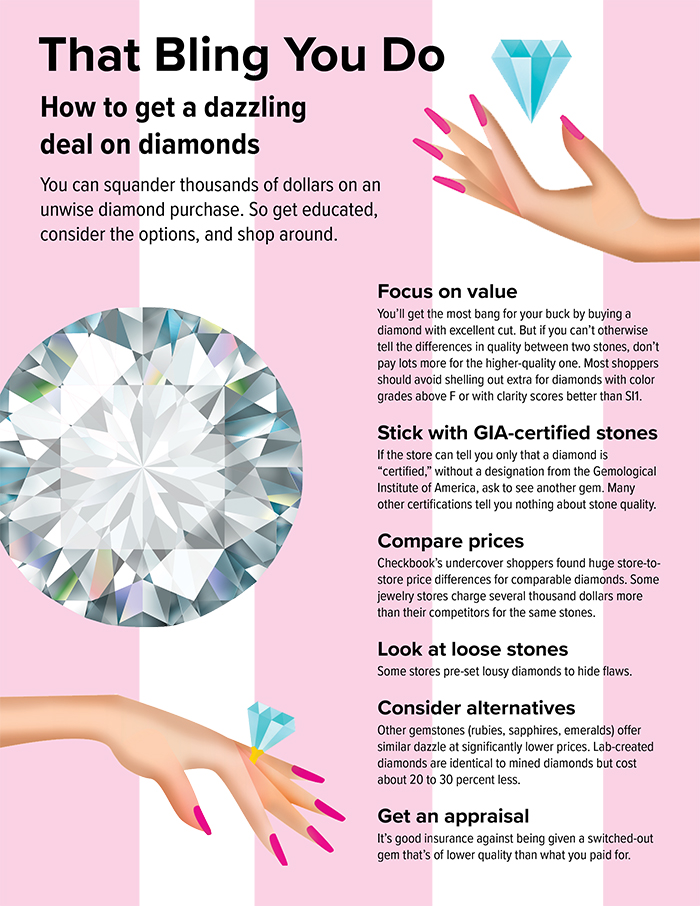