Our ratings of local chains and stores report how each stacks up for price and quality. To compare prices, our researchers used a 154-item market basket of common items—and a lot of energy—to shop area options. To evaluate stores on quality of products and service, we surveyed area consumers. The results are reported in our ratings tables and summarized below.

Whole Foods appears to have lowered its prices since the Amazon buyout, but it remains one of the area’s most expensive grocery chains.

When Amazon purchased Whole Foods last year, many consumers were excited by the prospect of paying Amazon-like prices for Whole Foods-quality products. But we’re not there quite yet.

Whole Foods built a loyal following by offering high-quality produce, meat, prepared foods, and generic staples, evidenced by the very high ratings it gets for the produce and meat quality questions in our surveys of grocery store customers. Whole Foods’ customers continue to rate it highly on our surveys for quality of fresh produce and meat—about the same as before the buyout.

But our price surveys always found that it charges whole-paycheck prices; in 2016, when we last shopped area stores, Whole Foods’ prices were 33 percent higher than Safeway’s, the area’s largest chain. Although Amazon successfully spins up a lot of media attention whenever it announces a (usually minor) price cut at Whole Foods, it remains among the most expensive options among local chains and stores we shopped. But there has been some price movement: This time we found its overall prices were about 12 percent higher than the average prices at all stores we shopped, or 10 percent higher than Safeway’s. And we found the prices it charges for its “365” store brand and independent brands (Whole Foods sells few national-brand products) remain more expensive than the least expensive options offered at the other chains and stores we surveyed in the Bay Area.

Whole Foods’ Amazon Prime discounts don’t yet add up to much.

Like most grocery stores, Whole Foods uses “loss leaders”—widely advertised discounts on a small number of items—to draw customers into stores (when calculating our price comparison scores, we use these sale prices). But there’s a new twist: Amazon Prime members who provide their phone numbers at checkout automatically receive further discounts (they can also scan coupons available on Amazon’s smartphone app). Prime members get an extra 10 percent off items already on sale at Whole Foods, plus special Prime-only discounts on a handful of other weekly special items.

While these perks sound great, we found so far that they aren’t worth much. Compared to most other grocery stores, Whole Foods runs very few sales (the store we checked the week we wrote this only had 23 items on sale) and offered just five Prime-only specials. Sometimes its Prime-only deals are designed to garner a lot of attention: For Valentine’s Day, it hyped that Prime members could buy two dozen roses for $19.99, instead of $24.99. But because Whole Foods and Amazon offer so few of these discounts, they won’t save most shoppers much money.

Grocery Outlet, WinCo, Walmart, FoodsCo, Foodmaxx, and Target were the price winners—where many families could save $1,350 to more than $3,000 per year.

Grocery Outlet, which offers a somewhat odd assortment of steeply discounted surplus national-brand products, offered prices that were about 30 percent lower than the average at all other stores we surveyed. WinCo was the other big saver, with prices 29 percent lower than average.

The next-best bets for low grocery prices in the Bay Area: Walmart and FoodsCo, each with prices 20 percent lower than average prices at all surveyed stores; FoodMaxx’s were 15 percent lower; and Target’s 13 percent lower. 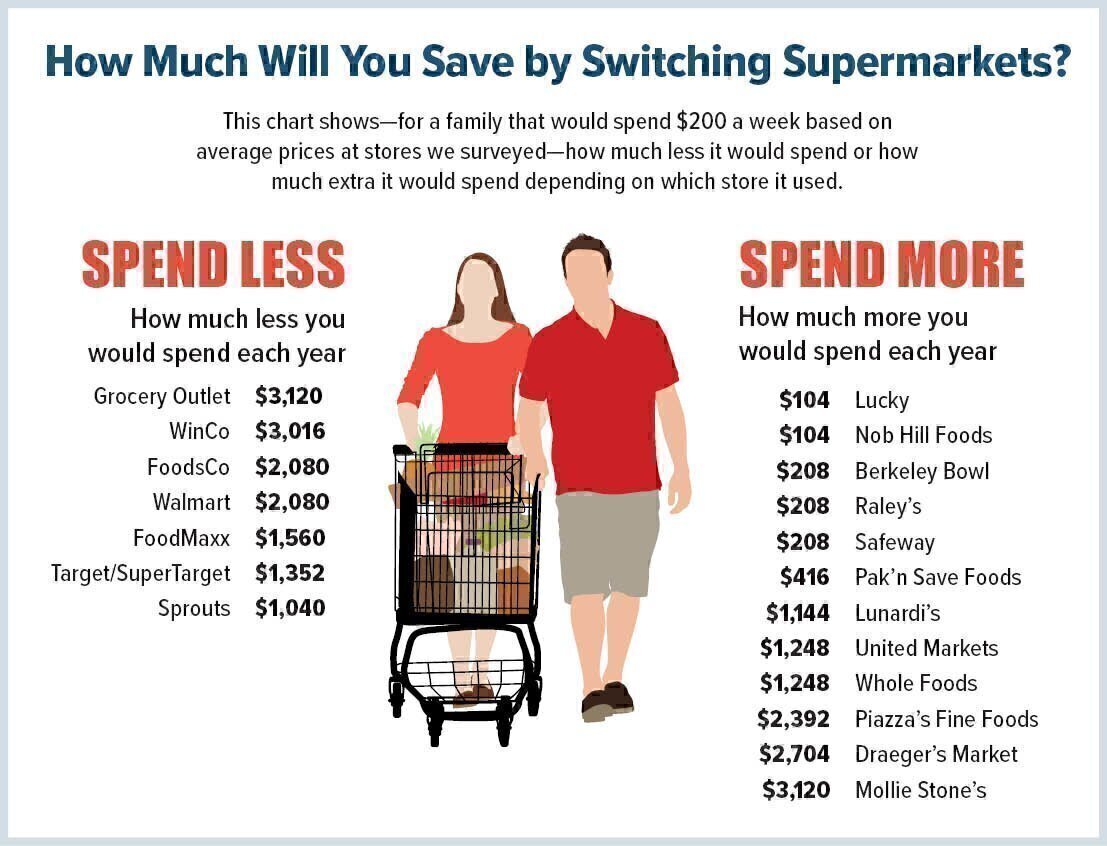 Shoppers using Grocery Outlet will have to shop at more than once place.

Although Grocery Outlet wins for price, it offers few options compared to other grocery stores: The location we shopped carried only about one-fourth of the items in our market basket.

For many years, shoppers in the Bay Area had very few low-priced grocery options. Although price leader WinCo’s stores are not conveniently located for most Bay Area shoppers (at the time of this writing, its only stores were in Brentwood, Pittsburg, and Vacaville), and although you can’t count on Grocery Outlet to stock everything you want to buy, most area shoppers live or work near at least one of these or another low-cost grocery option: Walmart operates more than 20 area stores that sell groceries; FoodsCo operates six area stores, including two in San Francisco; FoodMaxx has more than 20 area stores; and there are more than 40 Target stores offering fresh groceries.

All of the lowest-priced chains receive low ratings for quality (but so did more expensive Lucky and Safeway).

Lucky and Safeway rated toward the bottom of the list for “quality of fresh produce,” “quality of meats,” and “overall quality,” and so did their much-lower-priced competitors. (While we received too few ratings for Target to report scores, it also received low scores in the other metro areas where Checkbook is published.)

Lucky’s and Safeway’s prices were about the same.

These two traditional powers are now owned by the same company. Within the Lucky and Safeway chains, we found little store-to-store price variation. 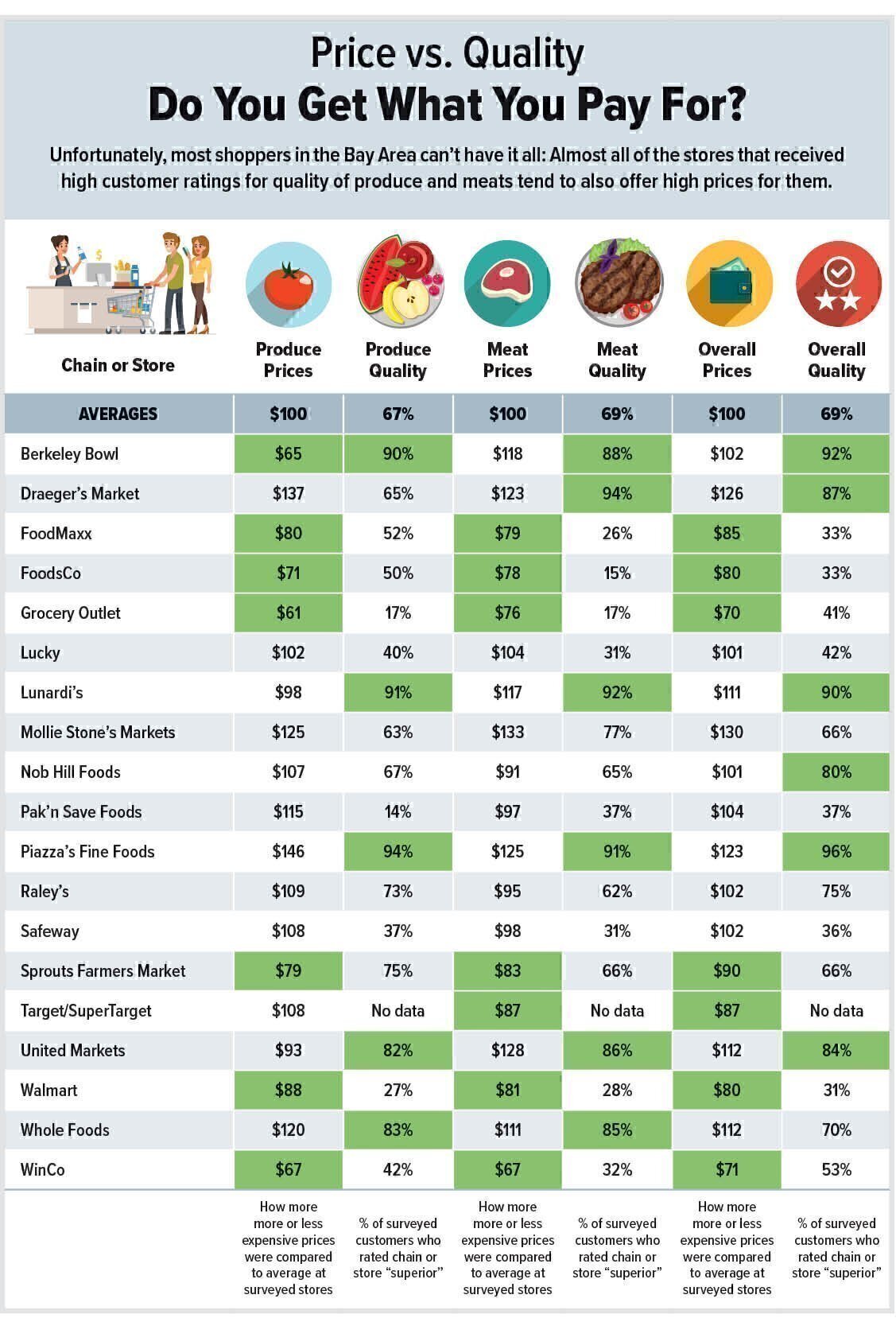 While Berkeley Bowl’s overall prices were about the same as the all-store average, its prices for fresh produce alone were among the lowest in the area—about 35 percent lower than average. And its scores for “quality of fresh produce” from our surveys of area customers were among the highest.

Similarly, United Markets gets very high ratings across the board from its customers and charges lower-than-average prices for produce.

Prices at the other area chains that rate highest for “quality of fresh produce,” “quality of meats,” and “overall quality”—including Draeger’s, Lunardis, Piazza’s Fine Foods, and United Markets—were substantially higher than average.

A few chains deliver higher quality than Lucky and Safeway while offering about the same prices.

Raley’s and Nob Hill had prices about the same as those at Lucky and Safeway, but scored much higher on our surveys of customers on quality.

When we substituted cheaper generic and store brands for about one-sixth of the items in our price-shopping market basket at Lucky and Safeway, the total cost of the full market basket dropped by about five percent.