You might think that if you’ve been driving for many years without an accident and with few speeding tickets that insurance companies will offer you their best rates. Unfortunately, that’s not necessarily the case. Insurers increasingly are offering their best rates only to customers who meet criteria that have nothing to do with their driving histories. For example, most companies offer their lowest rates only to customers with excellent credit scores and who are college graduates and homeowners. And companies are increasingly using secretive and opaque methods to calculate rates. The figure below reveals that some of these factors have huge effects on the rates you pay, but so do several other facts about you and your cars. 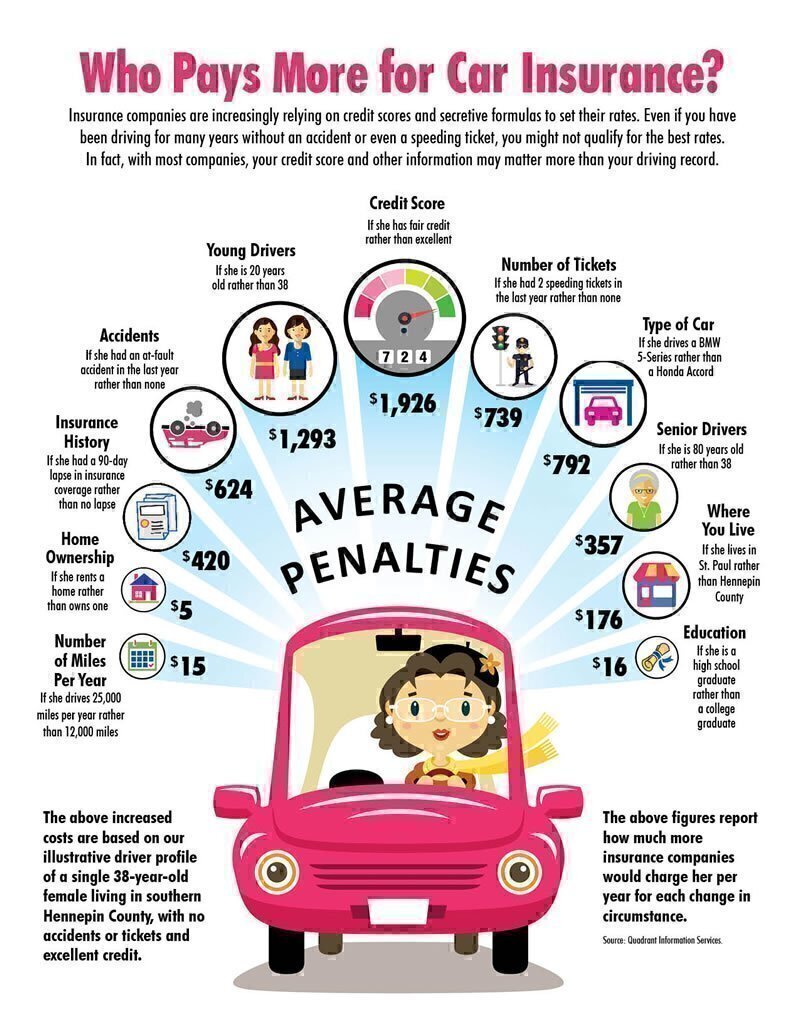 If you have been “loss free” with your current company for a while, it is probably giving you discounts. Another benefit of longevity is that if you’ve been with a company for several years and been accident- and ticket-free, an accident or ticket might not increase your rates, whereas a new company will consider your driving record for only the last three years or so, and impose a penalty if you’ve had an accident or received tickets.

Drivers who have not caused an accident or had traffic violations in the previous five or six years pay lower auto insurance rates than those who have caused accidents or had traffic violations. Although with many companies, a single speeding ticket won’t affect their rates, with others a ticket more than doubles their rates. Accidents can be even more costly than tickets. One at-fault accident in the last three years will on average double insurance costs for most drivers.

Fortunately, insurance companies don’t hold recent accidents or tickets against you forever. After three to five years, companies cancel penalties for previous accidents and tickets if you’ve been accident- or ticket-free.

Many companies now offer further discounts if you allow them to install a tracking device in your car that measures how much you drive, how far, how fast, and whether you often do knuckleheaded things like suddenly accelerate, brake, or turn. Under these programs, everyone gets a discount (10 or 15 percent) for playing along; after six months of tracking, companies offer a bigger discount (on average, an additional 10 to 15 percent) for being safe—or nothing if you’re a maniac. Of course, in our world of Big Data and big data breaches, these potential discounts come with big-time privacy concerns.

This does not mean that women or older men are better drivers than, say, 25-year-old men. They may have fewer accidents simply because they drive fewer miles. Nonetheless, low accident rates result in lower premiums.

Many companies offer special rates, usually four to 10 percent lower, for youths who have taken approved driver training courses. Studies have shown that these courses do not produce better drivers, but because “good risks” seem to take them, they serve as a convenient screening.

Many companies also give a break—often 10 to 20 percent—to youths who earn good grades (usually a B average or better). The combination of discounts for driver training and good grades may total 15 to 30 percent of a family’s premium.

Most companies also cut premiums dramatically if a youth goes to school more than 100 miles from home without taking a car. In addition, by agreeing to restrict a youth’s driving to a single less-expensive car, a family may be able to cut the rates on other cars it owns.

All insurance companies use credit history as a factor in setting rates. Some companies also offer lower rates to college graduates, homeowners, and persons in certain occupations. Insurance companies increasingly are charging customers very different rates depending on secret formulas they’ve developed that are based on data that have nothing to do with consumers’ driving histories.

Using these complicated formulas, insurance companies—or credit bureaus, on their behalf—calculate an insurance score that is used to determine rates, or even whether to cover a driver at all. The insurance formulas are not the same as those used by lenders (such as banks or mortgage companies) to calculate credit scores, but they draw on the same types of data and are becoming increasingly more opaque. The formulas vary from company to company, since different insurers (or scoring companies) weigh factors differently.

The appropriateness of using credit histories and other similar data in setting insurance rates is a hotly debated topic among the insurance industry and consumer groups such as ours. Companies clearly charge far higher rates to customers with poor credit scores than they do for persons with good scores. As the figure above reveals, our illustrative 38-year-old female driver with excellent credit would pay, on average, $1,926 more per year if she had a “fair” credit score. Compare that huge increase to the $624 penalty for having a recent at-fault accident or the $739 penalty for having two recent speeding tickets.

Our view is that all states should ban the use of credit scores and other financial information to set insurance rates, for several reasons:

If you have had a lapse in insurance coverage at any time in the last five years—including for non-payment of premium—expect your rates to skyrocket. Insurers view potential customers who have had insurance lapses as high-risk policyholders and most will not offer them their lowest rate plans. As the figure above shows, companies on average charge a $420 penalty for having a 90-day insurance lapse.

Similarly, many insurance companies will not offer their lowest rate programs to potential customers who have recently maintained liability coverage limits below the 300/100/50 level.

Some localities present more chances for accidents, experience a higher incidence of auto theft and vandalism, or have higher repair costs or medical and legal charges than others. These differences sometimes result in higher auto insurance rates in some parts of the area than in others.

Companies also consider the number of cars they are insuring for a family. The second car usually costs considerably less than the first because companies assume you will drive each car less than you would drive a single car.

From a consumer’s point of view, this dual-policy pricing is an undesirable practice because it makes shopping more difficult; to find out the exact savings you could realize by switching companies, you have to shop for both types of coverage at once. Click here to compare companies’ rates for homeowners insurance.