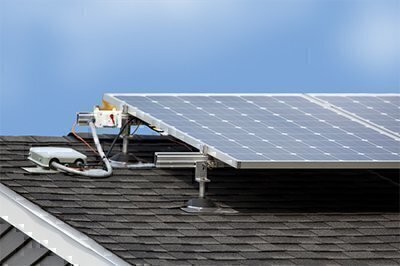 Since whatever you buy will be up there for years, do at least a bit of research about the options. Here are the main points:

The energy-generating components of any solar energy system are solar cells. They consist of semiconductors, usually made of silicon, which absorb sunlight and, using a built-in circuit, create an electrical current (“photovoltaic effect”). That current is passed through an inverter to convert it from direct current to the alternating current your home uses. Solar cells still produce power when it’s cloudy, but less than on sunny days.

Solar cells actually aren’t very efficient. Even the most efficient cells available now convert just over 20 percent of absorbed sunlight into electricity, and most convert only 12 to 18 percent. Although manufacturers continue to invent more efficient solar cells, the pace of the improvements is fairly slow comopared to, say, the pace of computer chip development. As you’d expect, the most efficient panels cost more than less efficient ones; on the other hand, you’ll need fewer panels made with efficient cells to generate the same amount of electricity as less efficient options.

Because each solar cell produces only a tiny amount of power, to generate meaningful amounts cells are combined into panels—sometimes called “modules”—that usually contain between 40 and 90 cells per unit. A typical panel produces between 200 and 350 watts of power under ideal conditions (basically lots of sun). For most residential installations, 15 to 30 panels are grouped into what’s called an “array.” Some installations feature more than one array to make the best use of rooftop space. Obviously, the more panels the more electricity generated, but for most homes 15 or even 30 panels won’t produce enough electricity to completely power your home all day or year-round.

Arrays are usually fixed in place, but some track the movement of the sun to capture more light. Tracking arrays gather and convert more sunlight to energy, but they cost more and have moving parts that require a lot more maintenance.

While the efficiency of a solar cell drops slightly over time, most panels sold today should efficiently produce power for at least 20 to 25 years. On the other hand, inverters, which typically cost between $1,000 and $1,500, generally last no longer than 12 to 15 years (a standard warranty is 10 years). So when you’re adding up system costs over the long haul, take into account the extra cost of replacing your inverter after 10 years or so.

Because many homeowners think solar panels are ugly contraptions, manufacturers have invented less noticeable options, including solar-sensitive films and roofing tiles. But these options are more expensive and less efficient than conventional panels. If you have a lot of acreage, another option is to install a ground-mounted system in an inconspicuous location.

Solar energy systems installed in homes that aren’t tied in to an electric grid (usually rural houses) use large batteries to store excess electricity that can be tapped when solar panels can’t generate it. Current versions can also be charged with gas- or diesel-powered generators. But batteries and generators are expensive and bulky.