How to Choose a Computer or Device

How to Choose a Computer or Device 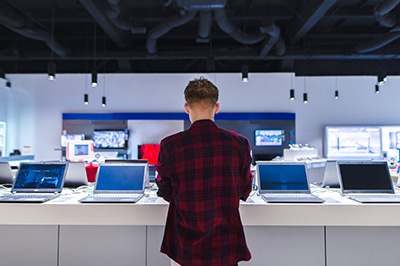 In order to have something to sell to a wide range of buyers, most manufacturers offer a dizzying array of options. There are laptops and desktops and tablets and netbooks and Chromebooks and 2-in-1 tablet/laptop combos. And each manufacturer offers several models with a wide range of capabilities (and price points) within each type.

Here are tips on how to wade through all the choices to find the right gadget for you. Start by deciding what you want and need—and ruling out what you don’t want and don’t need.

Fortunately, there are lots of product reviews out there:

You might also get good advice from salespeople at local stores. Our ratings of retailers for computer-related purchases will help you find businesses that employ sales staff who can help—and steer you away from stores where they can’t. For help finding the best retailers, read our article on finding stores that offer the best advice and the results of our price comparison shopping.

There are dozens of decisions to make—desktop vs. laptop vs. tablet vs. hybrid designs; Apple vs. PC; size, weight, and battery life; speed; video performance; storage and memory capacities; expandability; and more. We’ll review the major choices.

The differences between devices made by Apple and those made by other manufacturers (which for computers are commonly referred to as PCs) are much less distinct now than in the past. The major remaining differences are mainly in “feel”—the interfaces they use. If you’re thinking about defecting from PC to Apple, or vice versa, try out each type’s devices and software, performing the types of tasks you expect to do most.

Your primary concern will be compatibility, because it may be inconvenient to move work back and forth between the two families of devices. Also make sure you and your family can run the same programs at home that you run at your office and that your children run at school. And if you or a family member has a lot of experience with either type of computer, it might just be easier to stick with what you know.

While reliability is a major consideration when buying electronics, Consumer Reports’ surveys of consumers typically find minimal differences in reliability among the major manufacturers, with one notable exception: Apple for many years has outscored its competition in this area.

If you’re set on buying a non-Apple product, because no large differences exist in the major brands’ track records for reliability problems, compare performance, features, and prices offered by several manufacturers. You’ll find that prices vary considerably for similar setups from well-known brands.

Laptops, tablets, and 2-in-1 laptop/tablet mashups have become so capable, convenient, small, and light—with no large price penalty—that they now dominate device sales. When shopping for one, consider the factors we discuss below with regard to speed, storage, and other capabilities, but if you want a traveling computing companion, also compare size, weight, and battery life.

While larger computers are obviously more cumbersome, smaller devices come with smaller screens and keyboards. You might opt for a slightly larger model—and put up with two to four pounds of extra weight—to avoid squinting and make typing easier. On the other hand, while flying coach you’ll find it impossible to use most laptops with screen sizes bigger than 16 inches.

Also compare battery life. Three to six hours is typical, but some affordable laptops now offer 12 hours or more. Because manufacturers tend to exaggerate battery-life estimates, and because users’ battery-life mileage varies according to the software they use and how bright they set their displays, check product reviews from your computing cohorts to get realistic assessments.

A computer’s brain is its central processing unit (CPU), processor, or “chip.” Processors are critical to computer speed. In ads you may see a computer that comes with a “9th Generation Intel Core i7 4.5 GHz” processor. Each generation of manufacturers’ chips is built with improved structure and logic to process information faster than previous generations. The 4.5 GHz (gigahertz) is the level of “clock speed” at which the processor operates. As this number increases, so does the processor’s speed. But because each new generation of chips uses more efficient logic, and has a more efficient design that produces faster overall speed, you can’t compare chips from different generations by looking only at their respective processing speeds. The latest chips run far faster than those made just a few years ago when running at the same processing speed.

When comparing processing options, in addition to comparing generations and speeds check how many “cores” you get. In one with six cores, the manufacturer essentially has bundled together six chips into one, which means it can churn through information roughly three times faster than a comparable model chip that bundles together just two processors.

If you use your computer mainly for email, you don’t need to splurge on the latest generation of chip and don’t have to worry about numbers of cores—most older-generation chips should be fast enough. But if you want to stream video, speed is more important. And even light users may have to keep their computers up-to-date to utilize many common programs—such as tax-preparation software—that are continually redesigned with graphics and other features to make them more user-friendly but require chips with higher processing speeds. Also, if you buy a computer that’s much slower than one that you use at work or school, seconds will feel like hours while you wait for it to complete tasks.

For laptops and tablets, screen size and display quality have a moderate impact on prices. When selecting from among various sizes, remember that larger displays will make your device more difficult to drag around with you.

When considering display quality, if you plan to watch movies or TV shows you’ll want at minimum an HD model (1920 x 1080 resolution). These days even most entry-level models come with HD screens. If you want ultra-high definition (3840 x 2400 or better), you’ll pay more.

If you’re shopping for a monitor larger than 24 inches or want ultra-high def, compare prices of dedicated computer monitors with prices of TVs. You can connect either with an HDMI cable.

If you’re buying a laptop, you’ll also have to decide whether you want a touchscreen display. Because touchscreens cost a lot more than conventional displays, think carefully about whether you’ll actually use it vs. relying on a touchpad or mouse.

Most day-to-day computer work entails moving information to and from your hard drive. The size of hard drives is measured in megabytes (MB), gigabytes (GB), and terabytes (TB), with 1,000MB equal to 1GB and 1,000GB equal to 1TB. Most new computers come with hard drives ranging from 250GB to 1TB; tablets usually come with 32GB to 128GB of storage.

If you need a ton of storage space, you might have to sacrifice speed if you don’t want to pay extra for the very best thing. There are solid-state hard drives (SSDs) and conventional hard-disk models (HDDs). Because they lack moving parts, SSDs offer faster speeds, use less power (which means longer battery life), and fail less often than HDDs, but large-capacity SSDs are expensive—although each year are becoming more affordable.

You can check RPM ratings to compare speeds of HDDs, but, really, if you care about speed and want anything other than a very basic model, get an SSD. You’ll be glad you did.

Many top-of-the-line computers now come with both a large-capacity HDD and an SSD. These offer the best of both worlds: Super-speedy SSDs to store operating systems and other software and HDDs to stash space-hogging stuff that doesn’t require instant access, like pics and video.

If you’ll be using your computer primarily to mess around on the web, send and receive email, and do other basic tasks, you won’t need much storage-drive space; for a computer, even a small 250GB drive will have enough capacity for you and you’ll likely need only 32GB or 64GB if you stick with a tablet.

You can also expand your storage space by buying an external hard drive or subscribing to a cloud-based storage service. Both of these options are also convenient for backing up your files (which you’re regularly doing, right?).

A computer uses random access memory (RAM) to hold some of the data needed to run its operating system and other software in use. The more RAM your computer possesses, the more tasks it can perform simultaneously, which speeds operations. If it has only the minimum amount of RAM a program requires, only the most commonly used parts of the program may be in RAM all the time, and less commonly used parts will have to be fetched from the hard drive when needed. That fetching takes time that could be saved if more of the program is held in RAM.

As for processors, there are various generations and types of RAM, with the latest ones designed to operate faster and use more efficient logic than previous generations. A boiled down explainer of the types used in most computers: DRAM (dynamic random access memory) uses more power but can store more stuff and costs less than SRAM (static random access memory) types.

RAM is measured in megabytes (MB) and gigabytes (GB), which indicate how much data the device can store in memory. Because buying additional RAM is usually an inexpensive add-on, it makes sense to purchase as much RAM as your system and budget allow.

To display HD video and graphics-intensive games efficiently, computers shift the processing workloads of graphics from their central processors to graphical processing units (GPUs) designed specifically to process and display this information.

Like central processors, newer generations of GPUs are built and programmed to operate faster than previous ones. For example, new GPU chips can quickly process 3D graphics and UHD video.

Because advancements in home computing largely have been—and will continue to be—in the graphics and video areas, make sure you buy enough video processing capacity. Get one with a graphics chip with 4GB or more of memory—and even more if you want to play the latest and greatest games.

If you still use CDs and DVDs, make sure you buy a device that can read them. While many desktops still come with combination CD-R/CD-RW-DVD drives, to save space many laptops don’t. But you can buy an external drive to play or record discs using any computer or tablet.

Good computers are designed to allow growth. Multiple USB ports are a must.

Although manufacturers of peripherals have made great strides in this area, many dissatisfied consumers spend hundreds of dollars and too many hours fiddling with new purchases only to find that they can’t make them work. Especially before buying peripheral devices (displays, printers, scanners, etc.) or software, check for compatibility issues. Don’t buy anything unless you’re certain it will work with your computer, or has an ironclad guarantee that you can return it (with no restocking fee) if you’re not satisfied.