For decades, supermarkets have offered lower prices on certain items to members of their loyalty rewards programs, which require a phone number to join. Those discounts are featured in the weekly circulars and with shelf tags.

Now, the industry is moving into digital marketing by advertising in their circulars sale prices that require internet access. To get these digital deals, the customer must go online or use the store app to “clip” the digital coupons or offers they want and load them onto their account before they shop.

George, a senior who lives in Carlsbad, Calif., and shops at Ralphs (owed by Kroger, the fourth largest grocery chain in the U.S.) admits to being tech-challenged—and he doesn’t like being left out.

“I only have a flip phone and wouldn’t know how to download that stuff if you paid me,” George told Checkbook. “I don’t appreciate being a second-class citizen, especially when this affects people like me, who really need these discounts the most.”

In the past, George said, the cashier would let him have the digital-only discounts, but not anymore.

“If that isn’t discrimination, tell me what is,” George said.

Checkbook contacted Kroger and asked about its digital-only coupon policy. We did not get a response to our requests for comment. On its website, Kroger says: “Digital coupons are just like paper coupons, only easier!”

At some stores, digital coupons for in-store purchases are available on dozens of items including meat, fish, and poultry. The savings can be significant—often 50 cents to $1 off—sometimes more.

A recent ad from Shaw’s in Massachusetts (owned by Albertsons) advertised digital coupons for discounts of $3.02 a pound on beef sirloin steak tips, $2.02 a pound on raw shrimp, and $1.50 a pound on seedless grapes.

“Digital discounts are no deal for millions of shoppers, especially seniors and low-income individuals who don’t have online access, a smartphone to use the store app, or simply can’t follow the cumbersome online procedure, even if they do have the proper technology,” said Edgar Dworsky, founder and publisher of Consumer World. “They are a clever ploy by big supermarket chains to get people into the store, knowing full well that many of them will wind up paying more than the advertised price.”

Two surveys by the Pew Research Center in 2021 documented how many older and lower-income Americans don’t have the technology so many of us take for granted:

Suzie, a senior shopper on the East Coast, uses coupons to stretch her food budget, but said she can’t take advantage of digital discounts because she can’t get the store app to download in her phone. “They’re awful,” she said.

Suzie told Checkbook she suspects many older shoppers see the digital-only price in the store ad or on a shelf tag (see example below) and assume they’re getting that great deal simply by having a loyalty card.

“How many people see $1 off, and assume it’s going to come off the price at the register, not realizing they need to have downloaded a digital coupon? I mean, it’s ridiculous,” Suzie said.

Examples: You have to have a smartphone that can scan the bar code on this shelf tag to get the discounted price; otherwise, you’ll pay $3 more. 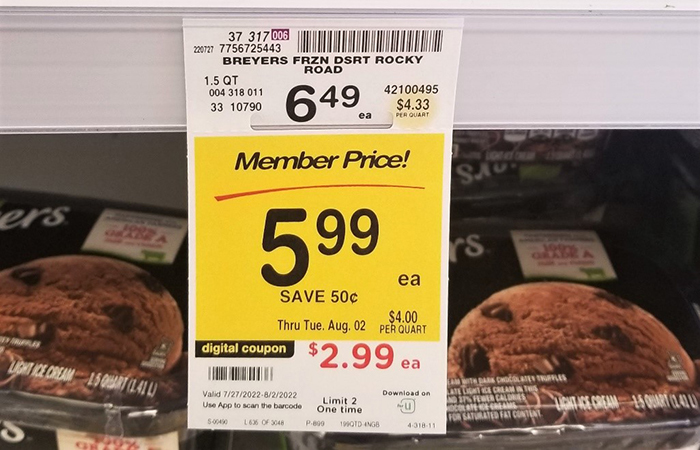 And you must use a smartphone to scan the QR code on this tag to take advantage of the $1.89 digital coupon price advertised in in bold red type for Tostitos or salsa dip. 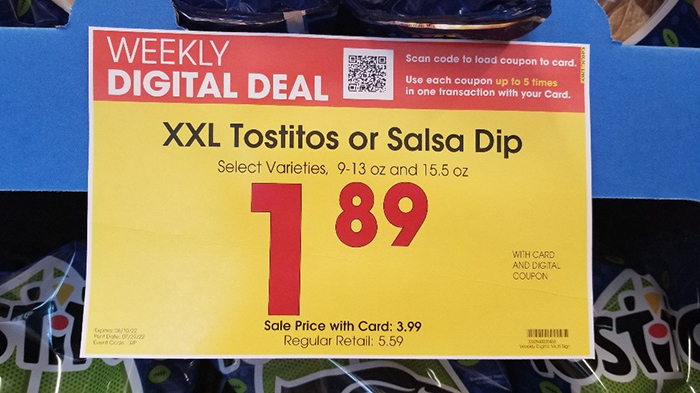 Why Is This Happening?

The new technology lets them better track and understand their customers.

Many shoppers like digital discounts, even if that means the store and manufacturer can collect more data about them. I use them all the time, but I have family members and friends who are limited to clipping coupons from the weekly coupon insert.

“Grocers offer their customers options for getting deals both online and in-store,” said Heather Garlich, a senior vice president FMI. “We’re meeting 100 million households where they are, and how they shop several times a week.”

Digital coupons do two things for retailers, Garlich told Checkbook: “They create process improvements at retail, and they reduce fraud.”

Whatever the business justification, digital-only coupons foster the digital divide because they don’t provide savings to every customer. Some in the industry are willing to acknowledge that.

“Coupons are a great way for people to save money and for manufacturers to move product, but we need to be careful not to leave anyone behind,” said Bud Miller, executive director of the Coupon Information Corporation, a non-profit group created by the industry to fight coupon fraud.

Seniors recognize the need for new technology, but Patty David, director of personal fulfillment at AARP, wants companies to invest in “age-inclusive designs” that ensure what’s developed can be used by everyone.

The use of digital-only offers featured in weekly circulars (separate from any manufacturer’s coupons available on the supermarket’s website) appears to be accelerating, according to Consumer World’s supermarket survey. In some cases, the number of digital-only discounts doubled or tripled in June 2022 compared to the same week last year.

In California, a recent Ralphs circular featured about 130 digital-only sale items that could only be purchased in-store at the advertised price if the offers had been preloaded online into a loyalty account.

“With inflation at a 40-year high, it’s time to stop discriminating against the digitally disconnected, particularly seniors, and offer them the same discounts already enjoyed by tech-savvy shoppers,” Dworsky said.

Some supermarkets have not adopted digital-only deals, many are using them sparingly, and some have created offline alternatives, Dworsky noted.

H-E-B, for example, with more than 300 stores in Texas, provides physical coupons at the store for digital-only offers for those who don’t use the internet.

A few chains, such as Albertsons and Giant Food, use “clip or click” coupons in their weekly ads in some locations. This gives customers the option to choose their preferred redemption method.

Albertsons, the country’s fifth largest supermarket chain, which operates more than 2,200 stores in 34 states, including Safeway, Vons, Jewel-Osco, and Acme, told Checkbook that customers who do not have access to digital coupons can present the ad to the cashier and get the discount(s) at the register. A Checkbook undercover shopper tried it at a Safeway store in the Seattle area and the clerk gave her the discount. Of course, you need to know to ask.

Dworsky told us he’s called supermarkets around the country, including those owned by Albertsons, and found that it’s hit or miss whether a store will provide the digital discounts without going through the online procedure.

“That’s a real problem,” Dworsky said, “Supermarkets must recognize that millions of their shoppers are not technology savvy and may be on fixed incomes. All the chains should offer a simple offline alternative so those folks can take advantage of the advertised savings.”

Is there anything shoppers can do about this? There seem to be two options: Complain to the corporate office of the store or switch to a supermarket that doesn’t use digital-only coupons.

It’s not your imagination. Manufacturers are cutting back on coupon promotions—both paper and digital—especially for food, according to the mid-year report by Kantar, a marketing consulting firm. The most notable decline was for cereal coupons. The face value of food coupons, both digital and print, also dropped.

Where is this headed? No way to tell. Many brands that have pulled their print coupons are slowly moving to digital.

As The New York Times reported recently, unlike paper coupons, digital coupons can be “personalized and aimed at specific demographic profiles.” Digital coupons also link to the shopper’s supermarket loyalty card, so it’s easy to tell if that coupon did its job and got the customer to switch brands.