Since whatever you buy or lease will be up there for years, research the options. Here are the main points:

The energy-generating components of any solar system are solar cells. They consist of semiconductors, usually made of silicon, which absorb sunlight and, using a built-in circuit, create an electrical current (“photovoltaic effect”). That current is passed through an inverter to convert it from direct current (DC) to the alternating current (AC) your home uses. Solar cells still produce power when it’s cloudy, but less than on sunny days. 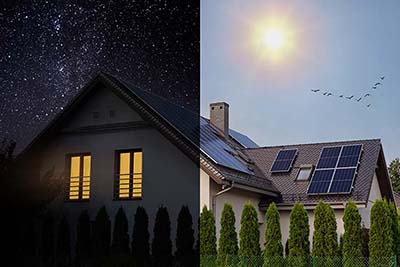 Because each solar cell produces only a few watts of power, to generate meaningful amounts dozens of cells are combined into panels—sometimes called “modules”—that usually contain 60 cells per panel. Panels used in residential projects produce between 340 and 425 watts of power under ideal conditions (basically, lots of sun). Most residential installations use 10 to 20 panels grouped into what’s called an “array” to generate 100 percent of families’ annual electricity consumption. Some installations feature more than one array to make the best use of available rooftop space. The actual number of panels you’ll need will depend on how much electricity you use, your specific roof’s solar potential, and the panels’ efficiency and wattage.

Residential arrays are usually fixed in place, while large commercial arrays move to track the movement of the sun to capture more light. Tracking arrays gather and convert more sunlight to energy, but they cost more and have moving parts that require a lot more maintenance, both of which make them unattractive to homeowners who want economy and simplicity.

While the efficiency of a solar cell drops slightly over time, most panels sold today should efficiently produce power for at least 20 to 25 years—or longer.

Most systems need little maintenance, but string inverters, which cost about $1,100 for an 8kW system, generally last only about 10 to 15 years (many warranties run for at least 10 years). So when accounting for the cost of your system over the long haul, include the extra cost of the likely need to replace the inverter after 10 years or so.

You can avoid having to replace inverters by buying increasingly popular microinverters. They cost more upfront—about $2,300 for an 8kW system—but they have longer lifespans: Leading microinverter brands are warranted for 25 years, which means they usually last about as long as panels. Microinverters are mounted on each panel and convert the DC power to AC there, unlike a centralized inverter, which does the conversion for the entire system at one location. Microinverters also help better manage and protect panels from “hot spot” damage that can be caused over time when a panel or the array is partly shaded during the day.

Because many homeowners think solar panels are ugly contraptions, manufacturers have invented more aesthetic options. CertainTeed offers solar shingles and tiles that get installed right on top of sheathing, replacing conventional shingles, and they don’t use the metal racking that panels require. So instead of looking like the International Space Station crashed onto your roof, these thin, low-profile units are installed even with the plane of the roof. But they will still have a glassy black surface that visually stands out from nearby lighter-color asphalt shingles covering the rest of your roof. In other words, they’re far less noticeable than conventional solar panels, but you’ll still notice that there’s a solar array up there.

Roof tiles and shingles made by Tesla and Luma Solar try to solve aesthetics problems. They swap out conventional shingles with roof-hugging photovoltaic generators, but use look-alike non-solar shingles to cover the rest of the roof. Their products thus become the entire roof, extending eave-to-eave and gutter-to-ridgeline as one uniform surface.

Tesla and Luma consider their roofing material products more upscale than other solar electricity-producing options—and price them accordingly. But they’re worth considering if you plan to replace your entire roof right before installing solar panels; compare the cost of the new roof plus panels to an all-in-one solar roof.

If you live on a lot of acreage, another option is to install a ground-mounted system in an inconspicuous location.