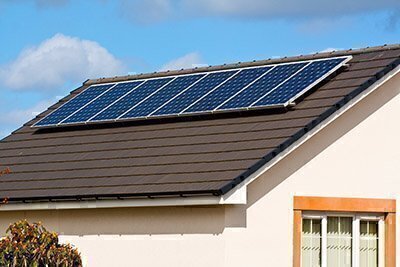 It’s now cheaper than ever and easier than ever to use the sun to power your home. A federal tax credit, a big rebate for Maryland residents, even bigger rebates for District residents, utility incentives, better and less expensive panels, and millions of consumers wanting to reduce their use of fossil fuels have combined to create a surge of interest in solar energy.

Although the cost to buy a residential solar energy system has come way down, the biggest obstacle for most homeowners remains price: To buy an average-size system, you’ll have to plunk down about $18,000. A 30 percent federal tax credit will pay for a chunk of that, and over time incentives from state governments and utilities, plus your lower utility bills, will add up to pay for the rest. But because state governments and utilities in the District, Maryland, and Virginia offer very different levels of incentives, how quickly you recover the amount you paid very much depends on where you live. District residents will see the shortest payback period: For an average-size house, it’ll probably take only four or five years; the payback period will be even shorter if you meet the income requirements for its very generous rebate program. In Maryland, where local incentives aren’t quite as generous, it’ll probably take about seven years. Because direct-dollar incentives in Virginia are small, the payback period there is nine or 10 years.

Homeowners in the District and Maryland—but not in Virginia—can avoid some or all of the upfront fees by signing on with a company that supplies equipment via a lease or similar arrangement in exchange for a monthly fee—usually $50 to $100 per month—and letting it collect the tax credit. At the time of this writing, solar leasing and related agreements weren’t available in Virginia.

Of course, many homeowners want to minimize their homes’ impact on the environment, regardless of any cost-benefit calculation. If you are in this group, solar for sure is for you.

No matter your motivations, if you're thinking about going solar, start by taking the following steps to help you learn about your options on what to buy, whom to buy it from, and how to calculate potential benefits.

Determine whether your roof is a good site for solar.

Some roofs are better sites for solar panels than others. By assessing your roof, you’ll more accurately estimate what a solar energy system can deliver.

Tally how much power you used during the last year and what you paid for it. Specifically note how much “metered” electricity you used, which is expressed in kilowatt-hours (kWhs). This indicates the power you bought, rather than the other charges for the equipment and lines to deliver electricity to your place and other overhead costs. Keep in mind that while solar power will sharply reduce the electricity you purchase, the tally for overhead costs doesn’t disappear.

Use online calculators to estimate ideal system size and get a sense for what’s possible.

Because many solar contractors supply prospective customers with inaccurate and overly optimistic estimates of ideal system size and payback periods, start by making your own rough estimate of what you can expect.

Don’t just do an Internet search for “solar energy system calculator”—which will likely find a bunch of tools that mainly serve as sales pitches for contractors. Instead, use the U.S. Department of Energy (DOE) PVWatts Calculator, a customizable tool that uses your address and specific details about your energy usage to create estimates you can rely on when discussing your job with installers. A good rule of thumb is to use a year’s worth of electric bills to calculate the average number of daily kilowatt-hours your home uses and multiply that number by 0.25. For example, if your house consumes 20 kWh per day, your system would need to produce about five kWh to match that usage (20 kWh times .25 equals 5).

Another good calculator is the Solar Energy Industries Association (SEIA) Solar Estimate. It also generates estimates of system size plus the cost of the panels and system, reports available financial incentives, and includes an estimate of the time needed to pay back the purchase price. Note, however, that if you supply it with your contact info, SEIA will send it to member installers in the area.

Think carefully about how long you plan to stay in your house.

The big upfront cost of an average-size solar install eventually will be paid back by tax credits and incentives and lower electricity bills, but that time period may be pretty long: For most homes in the District, it’s more than four years; in Maryland, it’s seven years; in Virginia, nearly 10 years. If your roof is a poor solar candidate, your payback period will be even longer. Although solar panels often raise home values, the price you pay to buy and install a system is unlikely to increase the value of your home on a dollar-per-dollar basis. If you think you’ll move within the payback period, there’s a good chance that the sale price of your house will not be increased enough by the addition of a solar energy system to offset the cost of installing it. Some buyers may in fact consider the presence of solar panels a negative.

Calculate how quickly your system will pay for itself. Above we provide a rough estimate of the payback period for a standard-size system installed in the Washington area on an average-size home that uses an average amount of electricity. As you can see, it takes several years for the benefits of solar energy to play out, but the tax credits, other incentives, and lower electricity bills do, over time, recapture the high upfront costs. If your roof is a poor solar candidate, your payback period will be even longer.

Using the tips and resources provided above, calculate how quickly your system will pay for itself—and whether you can live with that.

If you want to buy a larger system than the one in our illustration, you’ll get even bigger consumption savings and bigger tax credits and incentives—but the bigger the system the higher the upfront costs.

In the District and Maryland, but not in Virginia, you can eliminate most or all of the big upfront costs by leasing, rather than buying, a solar energy system. Although these programs might represent good deals for you, as we discuss here, leasing presents its own set of problems, including what happens if you sell your house before the deal expires.

Whether you get a solar energy system or not, the easiest way to save on the cost of energy is to use less of it. Measures such as installing and using a programmable thermostat, making sure you have adequate insulation, installing weatherstrippings around doors, and replacing broken-down heating and air-conditioning equipment and appliances with highly efficient models significantly lower utility bills.

Make sure it covers solar energy systems. (Most do.)