How to Tell If It’s Time to Re-Tire

You need to replace your tires when they wear down to 1/16 inch of tread. They’ve reached this level when tire tread is even with the wear bars built into the tread. You can also measure the tread with a penny: Insert it Lincoln-head-first in a tread groove; if the treads don’t cover part of Abe’s head, they are worn down too far.

You might want to replace your tires sooner to improve traction on wet roads. Having more tread means water will be carried away from a tire’s footprint on the road. (Shallower tread, up to a point, may actually improve traction and handling on dry roads, however.)

If you don’t drive much, you might need to replace your tires before their tread is worn. Tires dry out as they age, reducing performance and safety. Several car manufacturers recommend replacing tires after six years, regardless of tread wear.

Regardless of tread wear or age, replace a tire if you see a bulge or blister on the sidewall; and if you see cuts or cracking, have an expert inspect it. 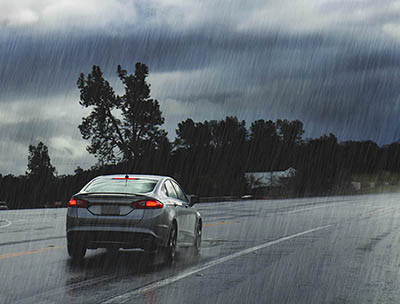 The placard/sticker pasted on your vehicle’s door edge, doorpost, glove box door, or fuel door indicates the correct size and type of tire; this info also appears in your vehicle’s owner’s manual. Or you can obtain it from “tire finder” tools on tire manufacturers’ websites.

When shopping for tires, confirm that you’re getting the right size and type by checking tire sidewalls. The size appears on the sidewall as something like “P215/65R15”—the “P” indicates it is a passenger tire, “215” is the width in millimeters, “65” is the ratio of height to width (aspect ratio), “R” means that it’s a radial tire (as opposed to bias-ply or diagonal-bias), and “15” is the rim diameter in inches. Replacement tires should also match the placard with respect to load index and speed rating, for example, “95H” (see below for advice on speed ratings).

In addition to getting the proper tires for your vehicle, you want tires that perform well. Below we discuss performance characteristics drivers care most about plus notes on the available sources for ratings information.

The U.S. Department of Transportation (DOT) requires tires to be rated on how many miles they can be expected to run before their treads wear down. A tire’s tread-wear rating appears on its sidewall; it is calculated by manufacturers using standards and testing procedures specified in the DOT’s Uniform Tire Quality Grading System (UTQGS).

A tire’s tread-wear grade is a comparative rating based on its wear rate when tested under controlled conditions on a government test track. The ratings aren’t stated in terms of miles, but rather in abstract numbers such as 200 or 400—and there is no way to translate these numbers to the actual mileage you get. Actual mileage depends on your driving habits, road characteristics, climate, and other factors. But tread-wear ratings are intended for comparisons: If a tire is graded 400, for example, that means it wore twice as long on the test track as a tire with a 200 rating.

Tread-wear ratings are a reasonably good indicator of the life expectancy among different tire models from the same manufacturer. They’re also useful for comparing tires made by different manufacturers, but tend to be less accurate. The problem is that the testing is conducted only up to 7,200 miles, from which point manufacturers make their own projections—based on the wear observed during those 7,200 test miles—of how well the tread will hold up in subsequent miles. To put it kindly: Some manufacturers are more conservative than others in their projections.

A more reliable source of tread-wear information for many (but far from all) tires is Consumer Reports, which for more than 150 tire models regularly conducts its own tests for tread wear on the same test track used for DOT tests. But Consumer Reports' tests cover much longer distances and its projections of tread wear are made consistently across manufacturers.

In addition to tread-wear ratings, the manufacturers’ advertised tread-wear warranties are a source of information. In general, a tire with an 80,000-mile warranty will last about twice as long as one with a 40,000-mile warranty. Again, however, the manufacturers are making these claims, so you might be relying on marketing hype—particularly on comparisons across brands.

Unlike warranties for most big-ticket purchases, which promise to repair or replace defective items within a certain time period, tire warranties offer compensation on a prorated basis—for example, a 50 percent credit if tires with a 100,000-mile warranty last only 50,000 miles. Warrantying a tire for more miles than it is likely to last does not expose the manufacturer to much risk of paying claims by customers who get less mileage. As a practical matter, manufacturers pay very few claims and often entirely avoid paying claims by determining that the customer has not complied with all tire-care requirements, such as regular rotation and inflation pressure. Even if a manufacturer honors a claim, it typically offers partial credit toward its own replacement tires. Customers entitled to warranty credit often don’t bother to request it.

Yet another source of tread-wear information is internet seller Tire Rack, a deep resource for specifications, warranty information, and other data on virtually every tire on the market. It also collects consumer ratings of passenger car and light-truck tires on several attributes, ranging from dry traction to tread wear. While some tires have been rated by small numbers of consumers, many have been rated by more than 1,000. The website reports both the number of raters for each tire and the total miles of driving raters reported on. One concern, however, is that many raters report under 10,000 miles of driving on the tires they rated—a limited basis for judging likely tread life warrantied for many more miles. In addition, it is not clear whether respondents rating tread wear are rating how the tire performs relative to all tires or to manufacturer claims for the specific tires being rated.

The government-required UTQGS traction grade that appears on every tire’s sidewall indicates performance in stopping on wet pavement, as measured under controlled conditions on government asphalt and concrete test surfaces. From best to worst, the grades are AA, A, B, and C.

Although traction is a function of tread design as well as materials, the specific testing procedure used by the UTQGS reveals most about the materials. The UTQGS traction test does not evaluate braking on dry surfaces, cornering on dry surfaces, cornering on wet surfaces, or high-speed hydroplaning resistance—important aspects of safety. Even for what they do test, UTQGS ratings are not as discriminating as you’d wish. Almost all tires on the market today are graded AA or A, and very few are graded B or C.

The testing periodically performed by Consumer Reports provides information on a much wider range of issues—braking on dry, wet, and icy surfaces; snow traction; emergency handling; and ability to resist hydroplaning on standing water.

Tire Rack also performs traction and handling tests of some tires it sells, typically comparing three manufacturers’ competing tire lines with one another. The results are reported using an aggregate scoring system for “real-world road ride” comparisons as well as reports on braking distances. The site’s editors and testers also report their own subjective experiences during testing.

A tire’s UTQGS temperature grade, shown on its sidewall, indicates how well it resists generating heat and dissipates heat when tested under controlled conditions on an indoor laboratory test wheel. Tires that perform well in these tests can run at higher speeds without failing. From best to worst, the possible grades are A, B, and C.

The test used to calculate temperature grades is similar to the test for “speed ratings,” also shown on the sidewall. Speed ratings for passenger car tires are, in increasing order of performance, M, N, P, Q, R, S, T, U, H, V, W, Y, and Z. A speed rating of M, for example, means the tire can withstand the heat generated if the car is frequently driven at speeds of 81 mph. A rating of V means the tire can withstand the heat generated at speeds of 149 mph.

Car manufacturers often recommend tires with speed ratings far higher than you might expect. For example, the tire placard for a 2021 Toyota RAV4 AWD recommends a speed rating of V. That doesn’t mean Toyota expects owners of its small SUVs to drive routinely at 149 mph, but it does predict how well a tire will handle at lower speeds, and manufacturers want drivers of their cars to benefit from this tire performance.

You may also be interested in the comfort of the ride and the amount of noise tires generate. Consumer Reports tests and reports on both attributes; Tire Rack reports user ratings and comments on them.

As mentioned previously, because tires can degrade as they age, you’ll want to buy freshly made tires. The DOT requires manufacturers to indicate the week and year they were manufactured on the tire’s sidewall. Look for the letters “DOT” followed by a four-digit code: “2521,” for example, means the tire was manufactured during the 25th week of 2021. If a tire is more than a year or so old, don’t buy it.

You Don’t Have to Pay More for Quality