Cavities: How They Form and How to Prevent Them

Cavities: How They Form and How to Prevent Them

Throughout recorded history, tooth decay (dental caries) has probably caused more pain than any other infectious disease. Fortunately, a lot of progress has been made, especially on behalf of children: Today over half of schoolkids age five to 17 are free of decay in their permanent teeth. But decay remains a serious problem, and still results in a lot of lost teeth.

How It Gets There

Bacteria cause tooth decay, but most oral bacteria don’t cause decay. The chief culprit is the bacterium Streptococcus mutans (S. mutans).

To do its nasty work, S. mutans must find a way to cling to the surfaces of your teeth. It does this by converting sugar into sticky lengths of molecules that attach to tooth surfaces, along with other substances present in the mouth, to form plaque, a gelatinous mat of microorganisms and other matter. 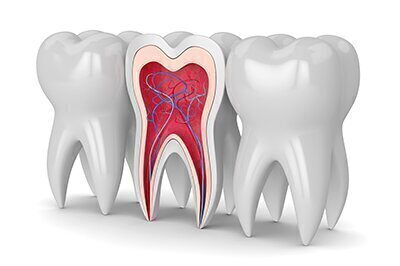 S. mutans is tough. It must manage to stay alive in an acid environment, tide itself over during periods when nutrients (primarily the sugar you eat) are lacking, survive with the low levels of oxygen that occur at deep levels of plaque, and withstand assaults from your body’s various defenses.

The bacterium does its damage by producing acid from the sugars you eat. When sufficiently strong, the acid causes the calcium and phosphorus that compose the hard surface of your teeth—the enamel—to dissolve. Each time you feed S. mutans by putting foods containing sugar into your mouth, the acid content of the plaque rises sharply, then returns to a harmless level after about 20 minutes. It rises further and subsides more slowly in individuals who are unusually susceptible to tooth decay.

At first, decay just weakens the enamel and makes it more porous, but it eventually breaks the enamel and moves into the dentin—the softer, bonelike material beneath the enamel. If a dentist’s drilling and filling do not stop it, the decay quickly spreads through the dentin into the tooth’s pulp, which contains nerves and blood vessels. You will probably feel pain at this point, and the tooth will require root canal therapy to be saved.

How Your Body Fights Back

Fortunately, your body does not stand still for the onslaught of S. mutans and other decay-causing bacteria. Indeed, if it did, the life of your teeth would be measured in days.

Your saliva helps in many ways; for example, by washing away both acid and clusters of acid-producing bacteria. Saliva also contains chemicals that neutralize acid and kill bacteria—by breaking down bacterial cell walls, for instance. In addition, saliva contains antibodies that inhibit the bacteria.

Your teeth can also fight back by repairing themselves over time. When acid levels are high, calcium and phosphorus are dissolved away; but later these minerals, which are held in solution in the saliva, return to “remineralize” the tooth. In effect, it is a swinging pendulum: Your tooth’s enamel weakens and then restores itself as the acid level of your mouth rises and falls. If your saliva contains fluoride, the remineralization process occurs more rapidly and produces a stronger enamel structure. Without fluoride, this process moves at a slower pace.

The magic ingredient in tooth decay prevention, fluoride contributes in several ways. First, when swallowed it enters the bloodstream, which carries it to developing teeth and bones. Developing teeth incorporate the fluoride into their enamel, making it stronger and less soluble. Second, fluoride that reaches the surface of erupted teeth speeds the remineralization process and results in stronger remineralized enamel. Third, some evidence indicates that fluoride retards the development or the activity of decay-causing bacteria.

You can get the benefits of fluoride many different ways—from fluoridated toothpaste and mouthwash, topical fluoride treatments, dietary supplements, and fluoridated water. All these fluoride sources help prevent or reduce tooth decay.

The most important and cost-effective way to obtain fluoride is from a community’s water supply (some water supplies naturally contain optimal fluoride levels). Even individuals who get fluoride from toothpaste and other sources benefit from fluoride in the water supply, experiencing a reduction of tooth decay of 20 percent to 40 percent compared to what they would otherwise experience. This reduction is achieved with minimal costs.

While most public water supplies are fluoridated, some dentists have recently reported an increase in patients’ tooth decay, which they largely attribute to some families’ use of bottled water or water filters instead of tap water. If your family rarely uses tap water, consider taking fluoride supplements.

For children, fluoride treatment is usually worthwhile. Almost all area dentists charge an additional fee for this, but it’s usually just $25 to $40. Although most studies of fluoride’s effectiveness have focused on children (since tooth decay is more common in children than in adults), strong evidence indicates that use of fluoride toothpastes and topical fluoride treatment can also reduce decay in adults.

Though fluoride offers many benefits, there are some caveats. Children who ingest too much fluoride while their teeth are developing can contract fluorosis, a condition that stains and pits tooth enamel. Fluoride in public water supplies should not cause fluorosis, but check with a dentist or physician before giving fluoride tablets to your children. Also, be sure children don’t swallow fluoride-containing toothpastes or mouthwashes.

To apply sealants, a dentist preps the tooth surface by dabbing on phosphoric acid, etching the enamel and leaving a relatively porous surface for the resin to adhere to.

The key to sealants is getting the resins to adhere and last. How long sealants stay put is largely a function of a dentist’s choice of sealant, technique, and keeping teeth dry before applying the sealant.

For the most part, sealants are applied to children’s teeth; sealants will not be effective for many adults because the resin will not adhere to the metal fillings that cover chewing surfaces. But if they can be applied, there appears to be no reason sealants won’t protect the natural surfaces of adult teeth as well as they protect children’s.

In short, sealants are an extraordinarily valuable preventive measure. One study by the Centers for Disease Control and Prevention found that children receiving dental sealants in school-based programs—in comparisons with children who didn’t receive such sealants—had 60 percent fewer newly decayed pit and fissure surfaces in back teeth for up to two to five years.

Controlling your diet is another way to cut down on tooth problems. Generations of kids have been told they’ll get rotten teeth if they eat candy or snack between meals. In general, that’s good advice, but sugar itself isn’t the only cause of mouth distress. Tooth damage also depends on how long a food remains in the mouth, whether particles stick to the teeth, and how much saliva is stimulated. While one study of animals showed that a chocolate cookie with a soft filling has three times the decay-causing potential of a low-sugar cereal, not all results are so predictable. The study found that potato chips, despite a presumably low sugar content, have a relatively high decay-causing potential, while some relatively high-sugar snacks pose little tooth decay risk.