How to Get Rid of Mice and Rats

How to Get Rid of Mice and Rats 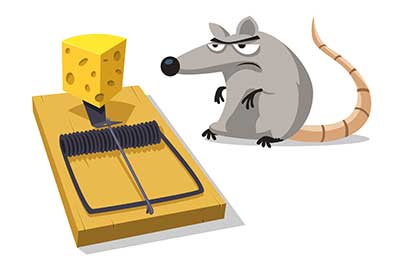 Mice will live in any protected space close to food. A mouse usually spends its entire life (about a year) within a 20-foot radius. In that time a female could raise as many as 35 young. You can detect the critters by their rod-like droppings, which are dark brown or black and less than 3/16-inch long.

Rats usually lurk in underground burrows, under piles of lumber or debris, in spaces between walls, and in attics. Indications of rat infestation include burrows and droppings (3/4-inch long, capsule-shaped). Mature rats generally weigh between 1/2 and one pound. They live for about a year, during which a female usually weans about 20 young.

Mice are curious. They explore new objects and are likely to be most interested in food (or bait) that is moved around from day to day. Rats, on the other hand, are suspicious.

Both rats and mice can spread diseases such as salmonellosis. Rats spread other diseases by biting humans (thousands each year) and carrying fleas that bite humans. In addition, rats cause fires by gnawing away electrical wire insulation.

To control mice or rats, start by eliminating places for them to live and sources of food. Seal off access to food (including stuff in cardboard containers), and place garbage in sturdy, tight containers. When the food supply grows scarce, rodents begin to kill one another off and migrate to better conditions.

A second important step is exclusion. Close off all openings to your home more than 1/4 inch in size through foundation cracks, around or under door and window frames, and elsewhere with sheet metal, heavy screen, cement mortar, or other barriers that rodents cannot gnaw through.

Then you may be able to bring a small infestation under control with traps; a wood-base snap trap is as good as any. Peanut butter is ideal for baiting.

Place your traps perpendicular to walls, with trigger ends toward the walls so that the rats or mice will run over them as they travel.

Although trapping may eliminate a small infestation, large problems will probably require poison baits, which are usually anticoagulants. Some rodent poisons have the safety advantage of requiring daily doses for several days to kill a rodent—and even more to affect a human. Thus a single accidental dose won’t be fatal, so you must maintain a continuous supply until it takes effect. Some also have another safety feature: denatonium benzoate, a substance so bitter that humans and pets can’t stand it, though rats don’t notice it.

If you use poison baits—even the relatively safe types—place them out of reach of pets and children, but don’t forget where they are. For maximum effectiveness, use fresh bait and smooth it regularly so you can see whether it is being taken. Place baits at multiple locations eight to 10 feet apart, because mice may never travel more than 10 or 20 feet, and even rats rarely range more than 150 feet.

If you’re not squeamish, you can attack rats or mice on your own; the traps and poisons available to you are the same that the pros will use. And while you’ll probably have to pay a pro for a series of repeat visits, an exterminator is likely to be more knowledgeable about the pests’ habits than you are.