How to Get Rid of Termites

How to Get Rid of Termites 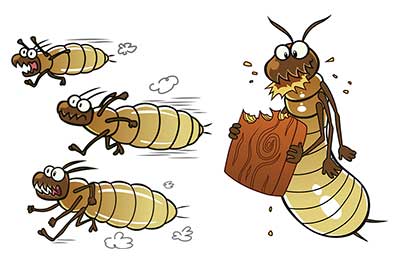 While an invasion of roaches or other bugs is merely unpleasant, termites can actually wreck the joint. Fortunately, the damage they cause spreads slowly, and you usually have lots of time to react before they do grave damage.

Termites live in colonies (workers, a queen, soldiers, etc.) and chow down on the cellulose in wood. Subterranean termites, the most common destructive type in this area, nest below ground, but the workers often travel above ground to gather food. They move through enclosed corridors either in wood or narrow mud tunnels that they construct up foundation walls to points of entry into wood.

You can spot termites in several ways: You may see reproductive “swarmers” in the spring when they fly out to form new colonies; you may discover mud tunnels on your foundation walls or on exposed joists in your basement; or you may find their hollow tunnels in wood while tapping or probing with a screwdriver.

Most termites are white with soft bodies and no wings, but their flying reproductives (“swarmers”) look a lot like flying ants. If you find an insect that you suspect is a termite, keep it and ask a competent professional to ID it.

If you have a termite infestation, you’ll probably need to hire a pro. Our Ratings Tables provide info on the service quality and prices of local companies, or branches of companies.

The traditional approach to termite treatment is creating a chemical barrier between the house and the soil. This usually means digging trenches around the foundation and pouring pesticide into them—or by pressure-injecting bug-killing stuff into the soil; it may be necessary to drill holes through the basement floor or into foundation wall voids.

For many years, the chemicals used for termite eradication were chemicals that created barriers effective for 20 to 30 years or even longer. But because of environmental and health concerns, these chemicals were phased out. Currently, two classes of chemicals are used: repellent (pyrethroids, such as permethrin and cypermethrin) and non-repellent insecticides (including imidacloprid and fipronil).

If your house has a large infestation, or has never before been treated for termites, the best strategy is to treat the entire home with a chemical barrier, then do spot treatments if new evidence of termites appears.

Companies may also suggest using a bait system, in which termite traps are placed every 10 or 15 feet around the structure’s perimeter. The traps are checked periodically to determine if termites have begun to eat the material. If so, the traps are replaced with baits that also attract the bugs but contain insect growth regulators: slow-release poisons that termites take back to their nest to share with their family. Eventually this leads to the collapse of the colony. After the infestation is eliminated, baits are usually replaced with traps, which are once again checked every one to three months for new infestations.

The problem with bait systems is the unscrupulous tactics of many companies that sell them. The traps are specially formulated to attract termites, so obviously sticking several around your home will eventually lure them. Not only will these companies have you on the hook for an expensive long-term contract to monitor the bait stations, but once the baits have done their job they’ll use the evidence of infestation to sell you a warranty against future invasions.

But used judiciously, baits can be an effective treatment. They limit pesticides released into the environment (chemical barriers can kill lots of beneficial insects), and baits are less disruptive than trenching, drilling, and other measures required to create a chemical barrier.

If you don’t currently have a termite problem, you’ll need to decide whether to take preventive steps. We believe the best way to save money and minimize pesticide usage is to not treat your house unless there is evidence of active infestation. The relatively minor damage likely to occur before an infestation is discovered—assuming you’re reasonably conscientious about inspection—does not justify the cost of treatment. (Still, preventive treatment during construction of a new house or an addition is a good idea.) However, some companies we have surveyed believe preventive treatment is appropriate at least for houses that have not been treated in a number of years, show no evidence of having been treated in the past, or are located in areas where termites are prevalent.

If a company discovers a termite problem, be skeptical. And if it gives an estimate and proposes to proceed with treatment, have it state—in writing—whether it has found evidence of active infestation. If so, obtain inspections and estimates from at least two additional companies before going ahead with treatment. Many homeowners who have had treatment recommended told us they later found that there was no active infestation. In some cases, the companies had shown evidence of termite damage but failed to explain that it had happened—and the infestation was successfully eliminated—years earlier. When challenged, companies may justify their actions by claiming that the treatment is preventive. That’s a reasonable option, but only if you know that’s what you are buying.

Another reason to get second and third opinions: Companies charge drastically different prices to solve the same infestations. To treat a small infestation, companies gave our undercover shoppers prices ranging from less than $600 to more than $2,000.

After getting a barrier treatment, companies typically include a one-year guarantee against further infestations in the initial price. If a reinfestation is discovered, the company must retreat. Some pest control services’ guarantees also oblige them to repair any structural damage that occurs after the initial treatment. The company must return to your home for a checkup a year after the treatment and whenever you detect evidence of termite activity. Many companies encourage you to pay an annual fee to extend your guarantee, typically 10 to 12 percent of the initial treatment charge, but some charge a fixed annual fee regardless of the initial charge.

After you’ve received a complete professional treatment with a chemical barrier, we advise keeping the guarantee for two or three years. If annual inspections reveal no reinfestation during that period, you can be fairly confident that the treatment has been effective and avoid paying additional annual fees to extend your guarantee. Just take advantage of a company’s free inspection services every few years—or any time you see possible evidence of termite activity. If a new infestation appears, it often can be eliminated without treating the entire house.

If you are considering extending a guarantee, check the language carefully—price, required inspections, whether essential structural repairs are covered, and what you have to do to keep the guarantee in force.