I’ve been a graphic designer for more than 40 years. I recently took on a project that’s bigger than I’m used to: an art book filled with the work of my deceased friend Laura, with the sales proceeds going to her favorite nonprofit. I’ve produced photobooks before—one about my pet cat Butter and another with pictures of my son on Halloween. But because I’ve never designed a humongous book before, I’m following a learn-as-I-go production method.

My main problem is that I have too much material to sort. I have hundreds of emails in my inbox, with materials from myriad sources. They’re not just images of Laura’s paintings. They also include biographical text from the book’s writer, family photos, numerous letters, illustrated journals from her world travels, and photos of memorabilia.

Because I’m easily overwhelmed by too many details, I tried to direct the flow of images into numerous folders, carefully labeling each one. Portrait? Make a folder with the subject’s name. Scans from an illustrated children’s book? Create a new folder with the book title. But since I had no quick way to find files, pretty soon the folders didn’t make sense. Did I save that one photo in the “Chapter 2” folder or in the folder called “Retouched and Resized?”

It didn’t help that all the images arrived in a range of states: some in raw form, others edited, and still others with final formatting, ready for placement into the book.

I hoped an organizing pro might have a more linear mindset to create a searchable system for me. Because there are so many types of professional organizers, finding the one best-suited to my project was tricky. Although many organizers claim to do digital work, most just scan and index family photos. After some research, I discovered that what I needed—in organizer lingo—was “version control,” which isn’t something many organizers know how to do.

I interviewed three prospects from NAPO’s online directory. They all proposed about four hours of work, charging between $75 and $115 per hour. They all were willing to meet with me for an hour so I could decide whether I wanted to continue—I didn’t want to commit to a big expense to work with someone who wasn’t a good fit.

I also concluded that I didn’t want a digital organizer to do the project in person with me. After sheltering at home throughout the pandemic, I wasn’t accustomed to being in close proximity to a stranger. And I didn’t see why, after reviewing my project over the phone, it would be necessary for someone to sit next to me for hours to go through my mess of folders. I wanted a pro to focus on supplying ideas for a new system.

I had one more prospect to interview. The website for “Terry” described her as a high-level talent. (Maybe that’s why I wasn’t allowed to interview her personally; she was way too busy doing high-level stuff with clients?) I outlined with her assistant what I wanted to learn, and she assured me that Terry was indeed an expert in all those areas. When she told me Terry had a one-hour opening for a phone call the following day for $200, I grabbed it. 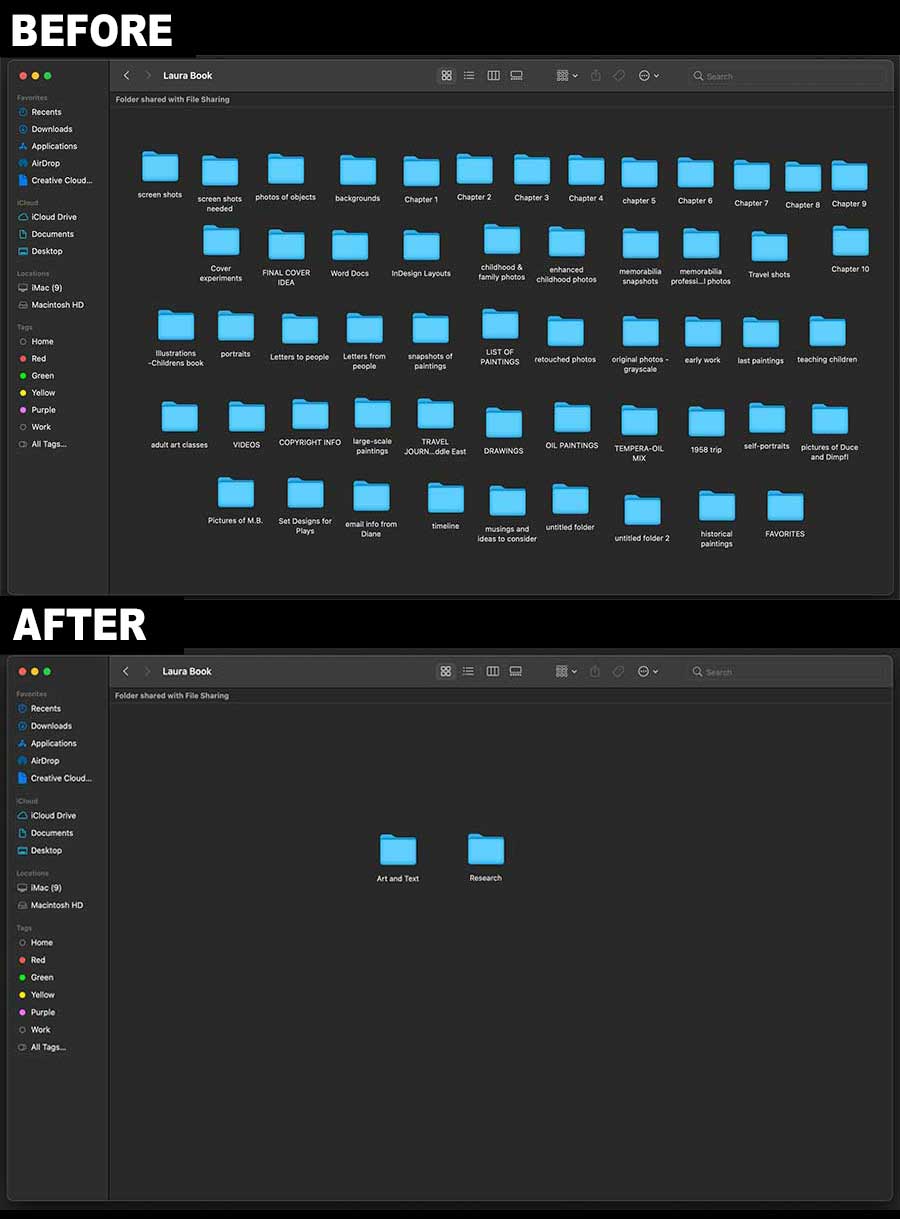 The session was intense. She recommended that I create just two main folders: “Art” and “Research.” Under “Art,” I’d create chapter folders and within each of those three more for “Raw,” “Edited,” and “Final” images.

Terry advised that I start by renaming each file so it began with “Raw,” “Edited,” or “Final,” and then sorting each into the corresponding folder. That way, I’d know where each exists in the production stream.

With her system, as soon as any file gets modified, it goes into the “Edited” folder. And to make searching easier I was to use long file names including everything about the image—source, any ID number, whether it’s a freeze-frame from a video or a reproduction from a painting, etc.—with no abbreviations or acronyms allowed.

Everything else? Into the “Research” folder, using the same naming conventions.

To many people, Terry’s ideas might seem like common sense. But they were a completely different approach than my usual way of thinking.

Following her advice, I created the folders and began renaming stuff. But after dealing with just 30 or so files, I wanted to take a nap. It was so tedious! The idea of messing with hundreds of files seemed like a 10-year hard-labor sentence. I went back to doing what I’m good at: designing. My digital chaos remains. Maybe I’ll tackle it later. Give me a month or two.