How to Get Rid of Unwanted Electronics Responsibly

Our old trusty flip phones, VCRs, tube TVs and computer monitors, videogame consoles, and many other old electronic devices were fun while they lasted. But when your gadgets become obsolete and worthless, don’t make the mistake of simply tossing them in the trash. Most contain a nightmarish mix of hazardous chemicals: lead, mercury, lithium, cadmium, and even-more-terrible-sounding materials that, if not handled properly, can pollute the earth or harm people.

It’s now quite easy to responsibly get rid of defunct or unwanted devices. Sadly, only 15 percent of the 6.9 million metric tons of electronic waste produced in the U.S. in 2019 was collected for proper recycling, according to the Global E-waste Monitor. The rest was dumped into landfills or, worse, shipped overseas for dismantling by children or other workers who are paid nearly nothing to toil in horrifically dangerous conditions.

“A lot of things can happen to that e-waste once it’s collected, and not all of them are good,” said Heidi Sanborn, executive director of the National Stewardship Action Council, an environmental advocacy group.

If a device is still in good working condition, you can give it to a friend or family member, or donate it to a school, Goodwill, or another charitable organization. You can try to sell that old tech yourself on eBay, Craigslist, Facebook Marketplace, Gazelle, Glyde Marketplace (for phones), and similar websites.

Since few old electronic products are collector’s items, you won’t make much money selling yours or trading it in. For example, Gazelle offered us only $72 for a functional, undamaged 128GB iPhone 8—less than 10 percent of what we paid for it just a few years ago.

There are many other options that don’t require you to create an ad and negotiate with random strangers over your iPhone 3 or whatever. Some manufacturers and retailers let you trade in working, but unwanted electronics, for gift cards, cash, or credit towards purchases.

Companies with responsible recycling programs (not all do the right thing, see below) include Best Buy, Samsung, and Staples. 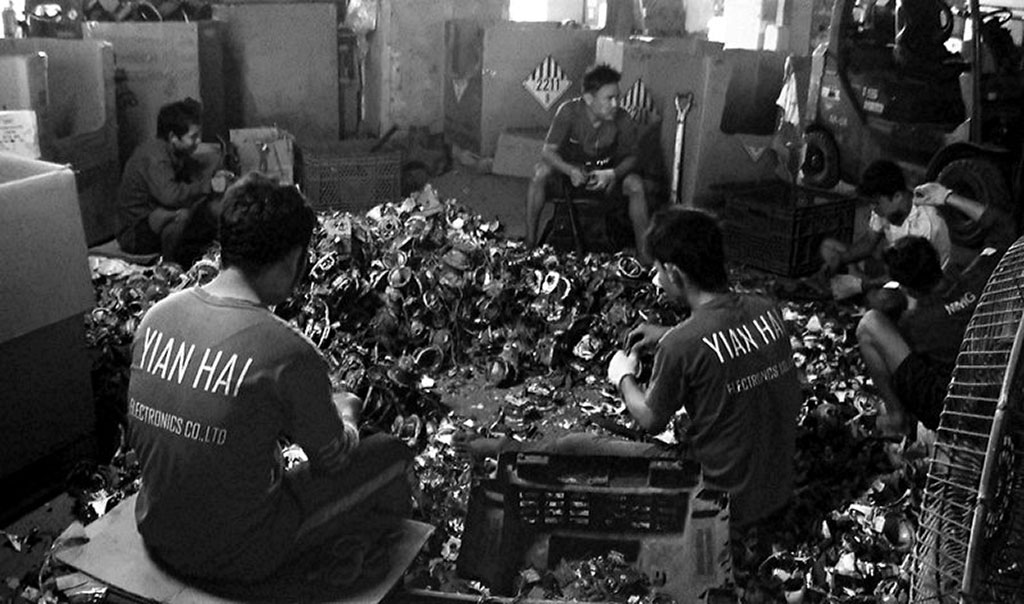 Some e-Cycling Does More Harm Than Good

For defunct devices, a responsible recycler is the best solution. Many retailers, recycling centers, and manufacturers make it easy to return unwanted electronics at stores and drop-off centers or via mail.

Staples has recycling bins at the front of its stores. Some Best Buy stores have bins; at others you have to wait in line to drop off stuff at their customer service counters. Home Depot’s stores collect and recycle old rechargeable batteries used in cordless power tools, laptops, and other portable electronics.

While some big-box stores try to follow responsible recycling practices, other retailers and many junk haulers, recycling outfits, and even municipal governments don’t. With them, there’s often no way to know what happens to your e-waste after you toss it in a recycling bin. Is that old computer, printer, monitor, TV, cellphone, or battery handled responsibly, or is it shipped overseas to pollute the environment and poison the workers handling it?

“It’s really criminal what we’ve been doing with electronics and plastics, exporting our waste to countries that can’t handle it,” Sanborn told Checkbook. “It’s not just dangerous to the environment, it’s very dangerous to the people; children breathing toxic chemicals from metals being burned in open pits. It’s absolutely horrible.”

Many of the environmental activists we spoke with said that in the last 10 years the U.S. recycling industry has become more responsible with how it handles the old electronics it collects. But “there’s still a lot of skullduggery going on,” according to Jim Puckett, executive director of the Basel Action Network (BAN), a nonprofit group that works to stop the flow of dangerous electronic waste to developing countries.

BAN is named for the 1989 United Nations Basel Convention, which bans the practice of shipping e-waste to developing countries. The U.S. signed the treaty but hasn’t legally ratified the convention’s obligations, making us one of just a few countries that isn’t compliant. 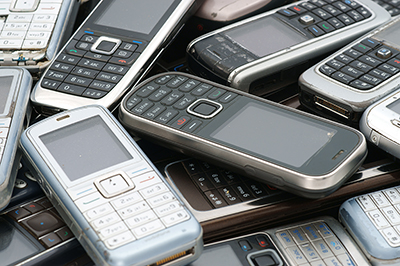 “There are really very few government regulations [in the U.S.] that require proper recycling of electronics, so a lot of companies are doing what’s expedient and cheap, and not necessarily responsible,” said Neil Peters-Michaud, owner and CEO of recycling company Cascade Asset Management. “For example, mercury is in a lot of LCD screens, so you don’t want to send those to a country where they might be tearing them apart without the technology to deal with it, or laws to control the proper handling of such a toxic material.”

There are two main voluntary certification programs for U.S. companies that recycle electronics: e-Stewards and Responsible Recycling (R2). The requirements for e-Stewards certification are more stringent than those for R2, most notably on the issue of preventing export of hazardous electronic waste to developing countries.

Corey Dehmey, executive director of Sustainable Electronics Recycling International (SERI), which developed and manages R2’s standards, defended the program. While the R2 standard does not prohibit exporting e-waste to developing countries, “it does not allow the illegal export of electronic waste, Dehmey told Checkbook. “R2 certified companies are required to do what is legal and they cannot do what is illegal,” he said. “To most people, data destruction is the most important issue,” not e-waste recycling.

It’s not always clear what some retailers do with electronics they take in. For example, the website for Office Depot OfficeMax reports that its stores take in old electronics and batteries, but it didn’t respond when we asked the company for details on how it recycles these materials.

“Consumers really need to take some responsibility for making sure the stuff they drop off is recycled responsibly, so look for a recycler that is e-Stewards certified to have more confidence that it’s handled properly,” Peters-Michaud told Checkbook.

The e-Stewards website maintains a database of drop-off points for certified companies, which includes Staples stores.

Note: Before recycling, follow manufacturer instructions on how to delete all your files and info. Unfortunately, crooks often can extract confidential data, even after you’ve carefully wiped a device. Recyclers certified by e-Stewards must follow data security practices; soon its requirements will include meeting standards set by the National Association for Information Destruction (NAID) for taking steps to thwart identity thieves or others that might steal your private data.

An e-waste shredder operated by ERI. Photo courtesy of ERI.

Doing the Right Thing Is Costly

Electronic recycling can—and is—being done responsibly by some recyclers. Many companies are committed to protecting the environment and are willing to pay for proper disposal.

For example, ERI, an e-Stewards Certified Recycler and the largest recycler of electronic waste in the U.S., operates eight processing facilities and refurbishes or completely recycles everything it receives. Most of the glass, steel, and aluminum gets reused by U.S. manufacturers. Plastic is shipped to Southeast Asia or Canada where it is reshaped into new products. Circuit boards are sent to reputable recyclers in South Korea.

ERI partners with retailers such as Best Buy and Staples on their takeback programs, as well as local government e-waste collection programs with major municipalities such as New York City and Los Angeles. Other well-known clients include retailers (Amazon, Costco, and Walmart) and manufacturers (Dell, Hitachi, LG, Lenovo, Panasonic, Samsung, Sony, and Vizio) as well as Waste Management and Republic Services, the two largest waste haulers in the U.S.

John Shegerian, ERI’s co-founder and executive chairman, says it costs considerably more to dispose of electronic waste responsibly. “We’re not the cheapest way to go, but these companies are willing to pay because they’ve made a cultural shift to do the right thing.”

BAN launched e-Stewards in 2003 to “stop the export of illegal hazardous e-waste to developing nations.” Certified e-Stewards recyclers agree to annual audits, unannounced inspections of their facilities to check on procedures and worker safety, and pledge that almost nothing they accept will go into landfills or incinerators. To keep companies honest, e-Stewards auditors hide GPS trackers in devices dropped off in recycle bins to make sure waste isn’t being surreptitiously shipped to developing countries. 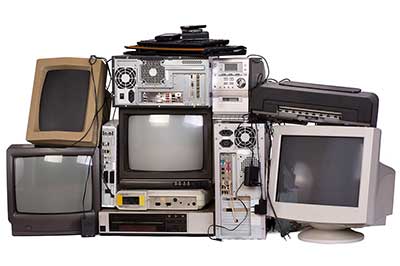 “It’s a very comprehensive one-stop shop for ethical recycling. We make sure the workers are protected and the community is protected,” Puckett said. “We did this because the U.S. government and the market are really not in a place to guarantee any kind of responsibility for electronics recycling, so we went to the marketplace to reward companies that do it right.”

Sometimes companies break their promises. Late last year, BAN’s hidden GPS trackers found electronics in Guatemala that were dropped off at Goodwill locations for recycling through the Dell Reconnect program. It was the third time BAN found Dell violating its recycling policy that states “e-waste is not exported to developing countries.”

Dell told Checkbook the incident “appears to have been the result of human error at the Goodwill location,” and the items in question never entered the Dell Reconnect recycling program. “Exporting e-waste to specific developing countries without prior approval violates our Electronics Disposition Policy, and we take all allegations seriously,” the company said.

“It’s too bad, but these two companies talk the talk but don't walk the walk. They don’t seem to care enough to really live up to the promises they have made to the public," said Puckett.

Pushing the U.S. to Do More

Environmental activists told Checkbook they plan to lobby the Biden administration to join the U.N. Basel Convention of 1989, and formally commit to the responsible handling of electronic waste.

“There’s a lot of e-waste fraud, but the states are forbidden to govern foreign trade under the Commerce Clause of the U.S. Constitution, so they really can't prohibit the export of this material,” BAN’s Puckett said. “We need to act at the federal level. We need to ratify that U.N. treaty.”

Improper recycling will “come back to bite us” in one way or the other, warns Heidi Sanborn at the National Stewardship Action Council. “It might be mercury in your fish. It may be jewelry for little girls that’s full of cadmium that came out of electronics sent to China.” (In 2010, Claire’s recalled metal charm bracelets imported from China that were found to have levels of Cadmium, a highly-toxic metal.)

“My belief is we should stop expecting someone else to handle our mess,” Sanborn said. “I was taught to clean up my room, and we’re not cleaning our room. We want to put it in someone else’s room and forget about it. And that’s wrong. And we need to stop it.”

Contributing editor Herb Weisbaum (“The ConsumerMan”) is an Emmy award-winning broadcaster and one of America's top consumer experts. He is also the consumer reporter for KOMO radio in Seattle. You can also find him on Facebook, Twitter, and at ConsumerMan.com.